Why have governments been so keen to legislate against civil liberties in the name of protecting us against terrorism, but remain so very reluctant to regulate financial markets.

Let me suggest a reason.

Banks offers juicy directorships to retired politicians and senior civil servants. Terrorist organizations do not. That needs to change.

I have always argued that if terrorists really want to achieve their political objectives  they should be employing bribes, not bombs.

Forget blowing people up. That will never work. It just increases the profits of armament companies and gives politicians an excuse to rant and rave.

Instead, terrorists should be employing well established methods for influencing political debates. They need to give lots of money to important politicians. Governments always have lots of people who appreciate a nice earner. The UK Parliament was [and likely still is] demonstrably full of such people. The US Congress seems to be packed with people who have 'For Hire' signs showing.

I suggest that your terrorist group set up a foundation [tip: do not include terrorist in the foundation’s name] and do the following –

1.  establish a big prize [say, about one million pounds] that can be awarded to a politician who has furthered the cause of world peace [i.e. has done as they were told].

2.  appoint politicians who have been ‘helpful’ to the board of the foundation. A salary of £100,000 a year for one days work a month would be about right.

4.   start a book publishing firm [tip: Jihad Books would not be a good name for the firm] and pay, say, £20 million for the rights to publish a politicians memoirs.

Of course, all these are well established ways of making payoffs to politicians. They have worked well for many business organizations and other bodies. Zionism has been particularly handy with its cheque book. 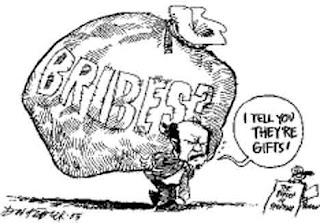 You will also need to remember the stick as well as the carrot.  Threats to fund electoral opponents has been particularly effective in intimidating many American politicians. And lets not forget the old standby of paying journalist to write smear stories about anybody who does not toe the line.

If you employ these tactics in no time at all we will see your leaders dining at the White House and being ushered into Number 10.  A bit of spin and any past unpleasantness will soon be forgotten. If this seems unlikely remember that when Britain was being forced to give up its colonial empire we branded a lot of people as terrorists. Five years later the same people were running our former territories and were popping into Buckingham Palace for tea and biscuits with the Queen.

Pope had it exactly right.

"In vain may heroes fight, and patriots rave;
If secret gold sap on from knave to knave.

Blest paper-credit! last and best supply!
That lends corruption lighter wings to fly!
A single leaf shall waft an army o'er,
Or ship off senates to a distant shore;
Pregnant with thousands flits the scrap unseen,
And silent sells a king, or buys a queen."

Congratulations, you've described the Israel lobby and, say, groups like the Mojahedin-e Khalq transition into respectability