The photo below shows Easdale Island. It lies off the west coast of Scotland, a few miles south of Oban. It is one of Scotland's slate islands. The ponds which dot the island are actually flooded slate quarries. Some of them are over 80 metres deep. Tens of millions of roofing slates were quarried from these pits and shipped around the world. There are Easdale slates in Australia and New Zealand. The island used to be the centre of the world's slate industry. 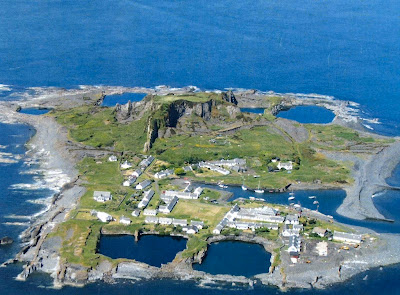 There are four slate islands; Easdale, Seil, Luing and Belnahau. Around 3,000 people lived on the islands when the quarries were working.  All the islands [and their quarries] belonged to the huge Breadalbane estate, owned by the Campbells of Glen Orchy.  The Campbells made a lot of money from the slate quarries but not much of it went to the quarry workers. The Campbells used some of the money to build the huge Taymouth Castle.

One terrible night in 1881  a storm and a high tide sent water over the island.  Livestock was washed away, gardens destroyed, 40 boats lost and the quarries filled with water. All the  machinery and the workmen's tools had been in the pits and were now underwater. Quarrying  stopped and the islanders were destitute.


The workers cottages were built of slate. You can see one below.  The ships that came to take away the slates brought soil in as ballast. This was spread on the island to create gardens where vegetables could be grown to supplement the islanders oats and fish diet. 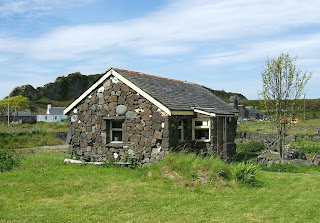 Some mining continued after the great storm, particularly on the other islands. The photograph below shows some of the slate miners from that period. 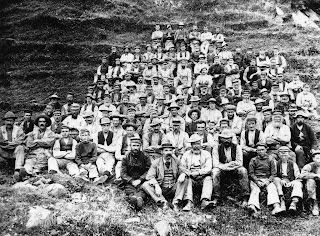 By 1930 the demand for slate had shrunk, the Breadalbane estate was bankrupt, people moved away to better paid jobs and slate mining ended. For many years Easdale was almost deserted but now the population has increased to over 60 and new houses are being built. It was a lovely summer day when I visited and the island looked beautiful. From the top of the island's hill there were outstanding views of the Firth of Lorn, the other slate islands and Mull. I would imagine it can be pretty bleak in winter.

A ferry connects Easdale to the village of  Ellenabeich on Seil. That is it in the photo below. 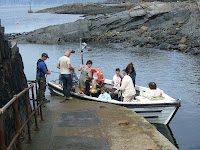 Easdale's main claim to fame now is that it is the home of the World Stone Skimming Championships. The contest is held in one of the quarries. 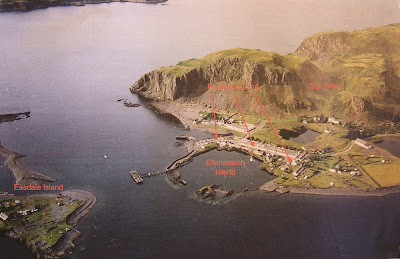 The village of Ellanabeich now stands on that landfill. 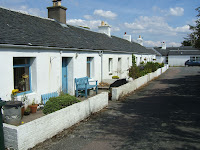 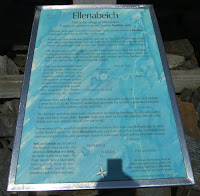 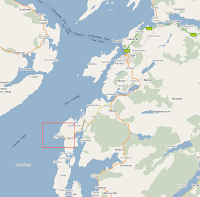 
I am doing an essay on the slate industry for UHI and I would like to include your photograph of Easdale slate quarries which would, of course, be correctly cited.

I would be most grateful for your permission for this + a suitable citation. You can email me at
jkgla-AT-yahoo.com

With all good wishes,

You are welcome to use any of my photographs.

Hi, same request. I'm writing an article in Gaelic for the newsletter of our local Gaelic society, "Slighe nan Gaidheal." I'd like to use one of the photos in the article.

Despite being Senior Scots, we had never heard of the Slate Islands or of Scotland's slate industry. Many thanks for your article. It made our visit today to Seil and Easdale all the more enjoyable. I&CH