How they produce tinned grapefruit

Have you ever eaten tinned grapefruit segments?

Have you ever wondered how the produced those nice clean segments?  How they peeled each grapefruit, separated the segments and removed all the pith?

They must be using some clever machinery, right?

Last night a new TV programme called Food Unwrapped on the UK's Channel Four went to a grapefruit canning factory in Swaziland to see how they really do it?

When the grapefruit arrive at the factory they are steam blanched to soften their skins. Then they go to the peeling and segmenting process.

This turned out not to involve really ingenious machinery but 250 African ladies and their fingernails. 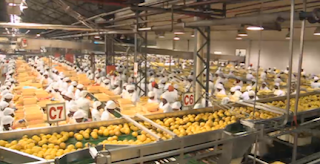 The grapefruit were now segmented but still had their pith. To removed that they soaked the segments in what was described as food grade [wtf?] hydrochloric acid. This did the job but left the segments contaminated with the acid.

To get rid of the acid they then washed the grapefruit in caustic soda, another powerful corrosive.

We were told the alkaline caustic soda neutralised the hydrochloric acid and left the segments safe to eat.

Should we believe that?  Well, if I lived  in a  country with a government that took food quality and safety seriously, and the interests of its citizens carried more weight than  the bribes of food industry lobbyists, I might.

Unfortunately, the UK is not such a country and so I do not.

I wonder if the same technique of  hydrochloric acid and caustic soda washes is used to produce other tinned fruit, such as orange segments.