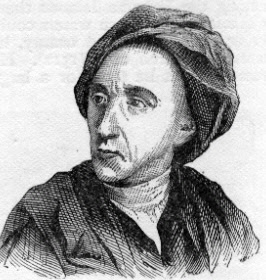 I've always enjoyed the poetry of Alexander Pope. For example, these lines from Pope's Essay on Man

Who sees with equal eye, as God of all,
A hero perish, or a sparrow fall,
Atoms or systems into ruin hurl'd,
And now a bubble burst, and now a world.

Hope humbly then; with trembling pinions soar;
Wait the great teacher death, and God adore.
What future bliss, he gives not thee to know,
But gives that hope to be thy blessing now.
Hope springs eternal in the human breast:
Man never is, but always to be blest:

Those lines were parodied by the notorious Thomas Potter as follows

O blindness to the future! kindly given,
That each may enjoy what fucks are marked in Heaven:
Who sees with equal eye, as God of all,
The man just mounting, and the virgin's fall,
Pricks, cunt, and ballocks in convulsions hurled,
And now a hymen burst, and now a world

Pope had a rather cynical view of politicians, and the power of corruption.

"In vain may heroes fight, and patriots rave;
If secret gold sap on from knave to knave.

Blest paper-credit! last and best supply!
That lends corruption lighter wings to fly!
A single leaf shall waft an army o'er,
Or ship off senates to a distant shore;
Pregnant with thousands flits the scrap unseen,
And silent sells a king, or buys a queen."

I suspect there have been several instances recently where there has been some secret gold moving from knave to knave.

A podcast about Pope on the BBC's In Our Time series rekindled my interest and I found this annotated copy of An Epistle to Arbuthnot. It is about the sad lot of the writer.

Who pens a stanza, when he should engross
Is there, who, lock'd from Ink and Paper, scrawls
With desp'rate Charcoal round his darken'd walls?

Why am I ask'd what next shall see the light?
Heav'ns! was I born for nothing but to write?
Has life no joys for me? or (to be grave)
Have I no friend to serve, no soul to save?

And these later lines could well be applied to many in the media, especially those who write for the British tabloid press.

Damn with faint praise, assent with civil leer,
And without sneering, teach the rest to sneer;
Willing to wound, and yet afraid to strike,
Just hint a fault, and hesitate dislike;

Pope had a sharp pen and many of his writings, including An Epistle to Arbuthnot, contain sly digs at his many enemies, and even some of his friends.

But foes like these!" One flatt'rer's worse than all.
Of all mad creatures, if the learn'd are right,
It is the slaver kills, and not the bite.
A fool quite angry is quite innocent;
Alas! 'tis ten times worse when they repent.