General Jumbo was a  comic strip character in a  in the UK comic The Beano. He was a twelve year old boy who commanded a remotely controlled model army, created for him by Professor Carter.  Jumbo uses his army for crime fighting and adventuring. 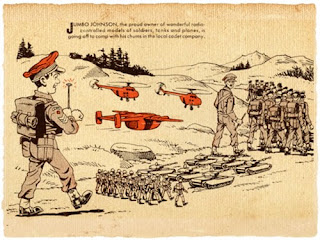 Jumbo made his first appearance in  1953 and continued until 1998. At first he was drawn by Paddy Brennan, a freelance Irish artist.  The strips are well drawn but Brennan drew Jumbo with an unfortunate facial expression. Later artists did better.  There is an archive of General Jumbo strips here. 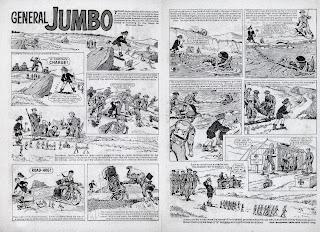 This strip was one of my favourites but I had completely forgotten about it until reminded recently by this knowledgeable site.

Some people have pointed out the similarities between the General Jumbo strip and the more recent  'Top 10' DC comic strip in which Police Officer Robyn "Toybox" Slinger  carries a  box filled with  robotic toys built by her father. 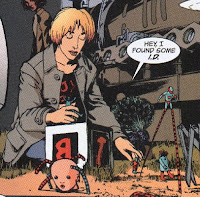 General Jumbo was a children's comic strip My other favourite from back in the day was Jeff Hawke, a comic strip for adults which appeared in the UK's Daily Express newspaper.  I had forgotten about both but if you sit long enough by the banks of the Internet everything eventually floats by.

I was daydreaming thinking of my younger days when "General Jumbo" came to mind. Then came Willie Wilkins Pobble, then the Beezer and Topper.I could go on and on. But I always wanted to be in control of the soldiers like Jumbo. Nearly 70 now.
Happy days

me too, the good old days.
I thought iu was the only one who missed general jumbo.

You're not alone guy's