Supernotes and the Law of Unintended Consequences 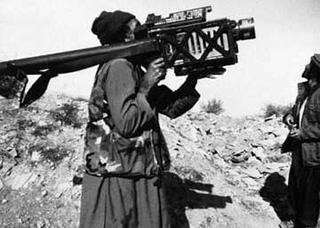 Supernotes are forged US$100 bills of such quality that they are very hard to distinguish from the real thing. There are believed to be billions of dollars worth of these supernotes floating around; mostly outside the USA. Why do these foreign jonnies have our dollar bills you might ask [if you are a US citizen]? They have them because the way in which the USA affords its present lifestyle is by printing lots of dollars and giving them to foreigners [in return for goods and services]. Johnny Foreigner is willing to accept the dollar bills because the US dollar is a reserve currency.

This is all very nice because it allows the USA to swop bits of paper for oil and microwave ovens. The problem is; what happens if someone comes up with another reserve currency? Which is just what those naughty Europeans are trying to do with the Euro.

The supernotes are of such quality that they must be produced by a Government which has got its hands on a intaglio press. How could they have done that since such presses are harder to get than nuclear weapons? This article suggests one answer

"Back in the 1970s, long before the revolution that would eventually topple him from power, the Shah of Iran was one of America's best friends. The United States government agreed to sell Iran the very same intaglio presses used to print American currency so that the Shah could print his own high quality money for his country. Soon enough, the Shah was the proud owner of some of the best money printing machines in the world, and beautiful Iranian Rials proceeded to flow off the presses.All things must come to an end, and the Shah was forced to flee Iran in 1979 when the Ayatollah Khomeini's rebellion brought theocratic rule to Iran.

During the early 90s, counterfeit $100 bills began to flood the Mideast, eventually spreading around the world. Known as "superbills" or "superdollars" by the US Treasury due to the astounding quality of the forgeries, these $100 bills became a tremendous headache not only for the US and its economy, but also for people all over the world that depend on the surety of American money.

Several culprits have been suggested as responsible for the superbills, including North Korea and Syria, but many observers think the real culprit is the most obvious suspect: an Iranian government deeply hostile to the United States... and even worse, an Iranian government possessing the very same printing presses used to create American money.If you've ever wondered just why American currency was redesigned in the 1990s, now you know. In the 1970s, the US rewarded an ally with a special machine; in the 1990s, the US had to change its money because that ally was no longer an ally, and that special machine was now a weapon used to attack the US's money supply, where it really hurts. As an example of the law of unintended consequences, it's powerful, and it illustrates one of the main results of that law: that those unintended consequences can really bite back when you least expect them.

The article mentions the Law of Unintended Consequences. This is when you do something without really thinking out the consequences and it comes back and bites your arse. Politicians must be particularly subject to the law, since they are so frequently bitten. Like the time the USA organised and armed the freedom fighters/terrorists in Afghanistan [especially with Stinger ground to air missiles] to help them defeat the Russians. Guess who the freedom fighters/terrorists turned to after the Russians had gone back home? Another example is Operation Iraqi Freedom. Do you think the White House numpties thought it would quite work out as it is doing?

The UK government has also had lots of experience of unintended consequences. Since they are particularly fond of legislation [one third of our laws have been passed in the last nine years] they have also been bitten a lot. Or, to be more precise, we have.

This Wikipedia article has some other examples of the L of U C in action.