This post is about an outstanding high level walk in the Dolomites. Part of the walk is through 52 tunnels cut during WW1.

During the First World War the front line between the Italian and Austro-Hungarian forces ran through the Dolomites. Monte Pasubio was a crucial stronghold for the Italians. They had to hold the mountain, but their supply lines to the mountain were being shelled and were subject to avalanches [on one day, the 13th December 1916, known as 'White Friday', 10,000 soldiers were killed by avalanches in the Dolomites]. The answer to the Italian Army's problems was the Strada delle 52 Gallerie.

The Strada delle Gallerie [Road of Tunnels] is a mountain path cut into Monte Pasubio in the Dolomites in Italy. It was built in 1916 by Italian mountain troops and teams of miners. The Strada was started in March 1917 and finished by the end of the year. 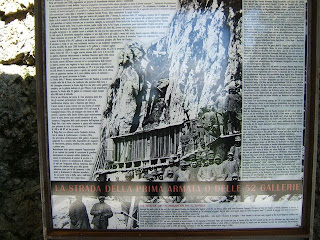 There are many military paths in the Dolomites. What makes the Strada unusual is that it runs through 52 tunnels with a total length of 2,300m. A further 4,000m of path is cut into the side of Monte Pasubio. It is one of the best high level paths in the Dolomites and walking it is a memorable experience.


Travelling to the Strada 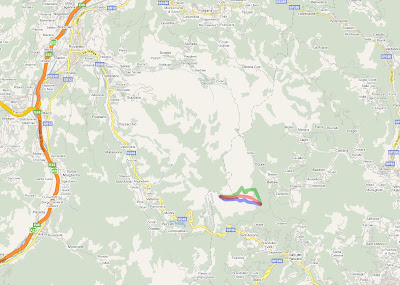 We stayed in the pleasant town of Rovereto. Next morning we drove along the SP46 from Rovereto towards Valli del Pasubio. About three quarters of the way along we turned onto a road running north to the start of the walk at Bocchetta Campiglia.

The track from the SP46 to Bocchetta Campiglia is narrow with few passing places. We didn’t meet any traffic coming down the track and were very grateful for that. The local commune need to get out their box of gelignite and blast some more passing places [they could also straighten out some of the worse bends].  There may be a better road to the Strada. I hope so.  If there is you should avoid our route.

There are two car parks at Bocchetta Campiglia. During the summer months it may be necessary to pause and buy a parking voucher on your way up.

The Strada delle 52 Gallerie starts from the first car park. After your walk you have to drive back the same way you came.

The walk starts at a car park at Bocchetta Campiglia [1216m] and ends at an Italian Alpine Club refuge called A Papa [1928m]. There is an information board at the start of the walk, with a small section in English. Each tunnel is numbered and at intervals there are more boards giving information on the next few tunnels. 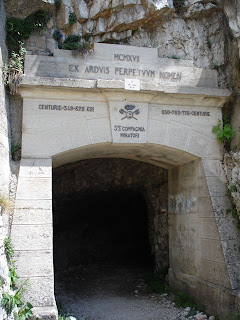 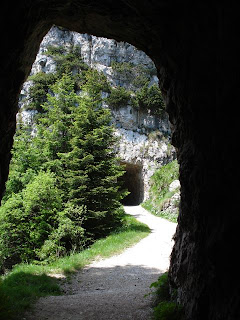 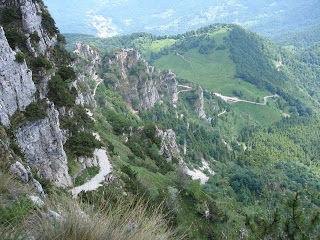 Looking back to the start of the path. The car park is just visible in the centre of the picture. 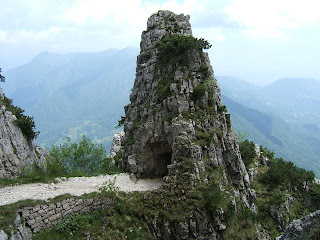 The tunnels vary considerably in length. The longest one is over 300m long. There are a few short ones but many in the 40-90m range. A good torch [plus a spare and batteries is essential]. There are long stretches of tunnel where it is pitch black. You will not need a helmet. I am almost 6ft and managed with a bit of stooping. 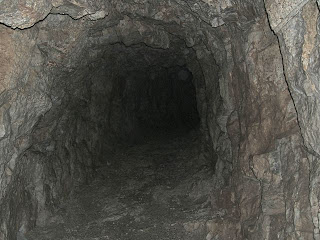 You will be ascending [sometimes steeply] pretty much all the time. Only the last two tunnels slope down. In some of the tunnels the path is smooth. In others it is very uneven. Water drips down from some tunnel roofs and makes the path slippery. 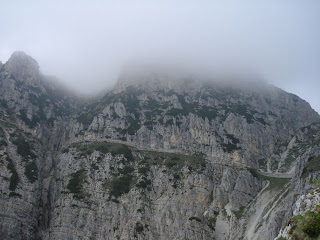 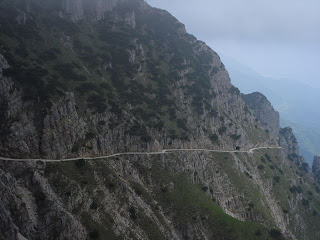 As you get higher there are splendid views of the valley. About two thirds of the way along there is a long open stretch where the path is cut into the side of the mountain. 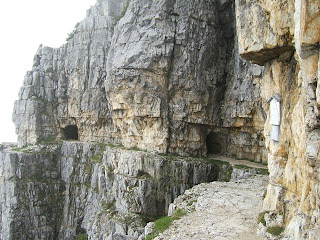 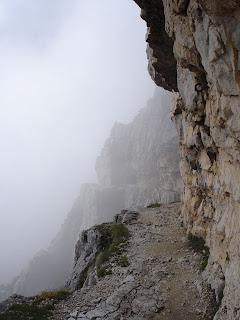 By the time we got past tunnel 40 we were in cloud. At the end of the Strada you arrive at Refuge A Papa where you can eat and drink. I think they also offer accommodation. 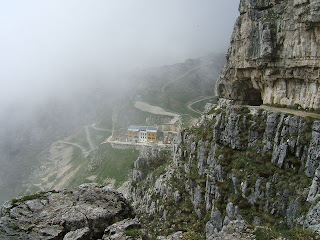 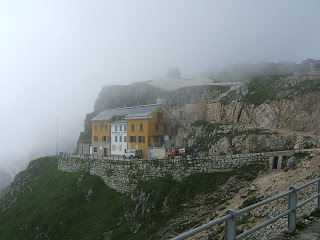 There appeared to be a path continuing beyond Refuge Papa.  It looked as if it was cut into the side of the mountain in the same way as parts of the Strada, but without any tunnels.  My map seems to indicate that this path is part of what is called "The Road of Heroes". 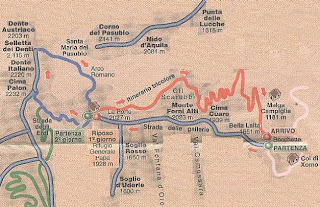 There are three paths between the car park at Bocchetta Campiglia and Refuge A Papa. 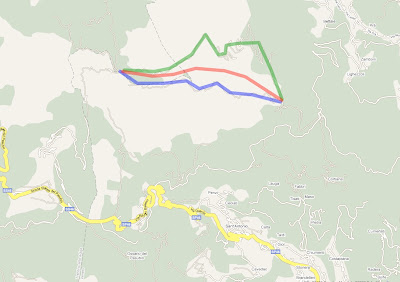 The Strada delle Gallerie [blue on the map]

Path 370 [green on the map]. This is a long open path that runs on the other side of the ridge from the Strada.

This photograph [not mine] shows the three paths. 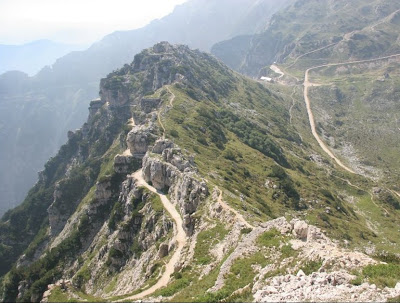 We went up by the Strada and came down by 370. More hearty types might go up by the via ferrata and back by the Strada. I don’t think descending through the tunnels is a good idea. 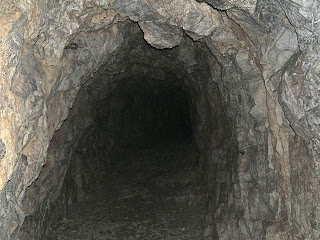 In some of the tunnels it is very steep and rough underfoot. The rock is also wet and descending offers numerous opportunities to acquire multiple contusions. If you plan to descend through the tunnels a walking pole would be handy to help you keep your balance [and a foam rubber suit]. 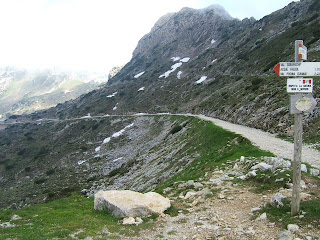 The above photograph shows Path 370. 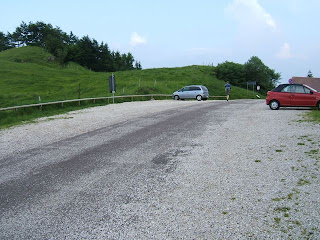 One of the car parks at Bocchetta Campiglia.

The relevant map is Kompass’s 1:50,000 101 [Roverto – Monte Pasubio]. The map was handy for finding the turn-off from the main road. It was not needed after that.

See this page for an excellent illustrated guide to the via ferrata Sentiero Gaetano Falcipieri  that runs alongside the Strada.  Another guide can be found in Via Ferratas of the Italian Dolomites: Volume 2 by Fletcher and Smith. Published in 2003 by Cicerone [UK].

Video of WW1 Italian soldiers in the Dolomites.

A nice video [not mine] of a walk up the Strada.

The Strada is supposed to be a classic mountain bike ride. The authorities have erected barriers at either end to stop bikers but it would be possible to pass bikes over the barriers. However, I think someone would have to be very silly to do the Strada as a mountain bike ride. It would be too dangerous and too much hard work for little benefit.

The journey between Rovereto and the car park at Bocchetta Campiglia took about 1 hour each way. It took us 3.5 hours to ascend the Strada and almost 2 hours to descend path 370. A sign at Refuge Papa states that it is only 2km along 370 to the car park. Don’t believe it.


I have written about other WW1 sites in the Dolomites in my posts on Via Ferrata Lagazuoi Tunnels and Monte Piana. The Strada is on a far grander scale than either of those. It has been described as ‘a marvel of military engineering’ and that ‘no other work equals it along the entire European front’. Because of its history [it played an important part in a key battle] and because it is so exceptional I think UNESCO might consider the path for World Heritage status. After all, so little remains of this terrible conflict. There are a few trench systems, the forts at Verdun and the cemeteries in France. We should have at least one relic of WWI on the World Heritage list. 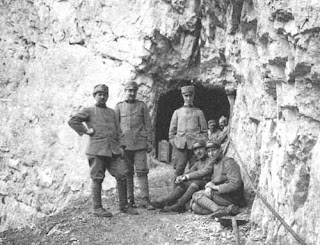 Have you walked the Strada?  Leave a comment below to describe your experiences.

For more posts on the Dolomites, other walks or my blogger's selections click on the tags on the right. 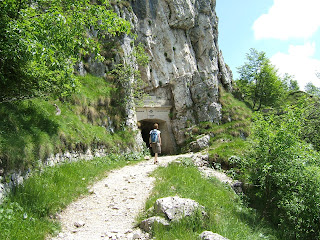 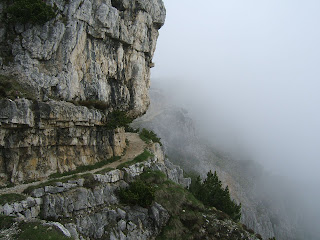 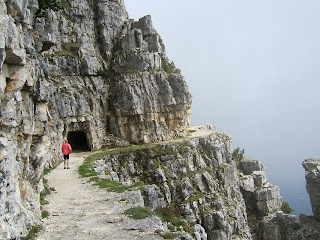 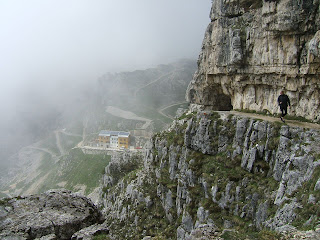 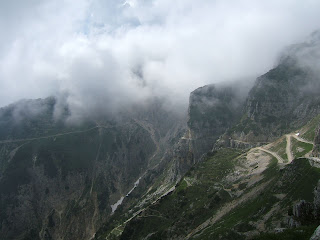 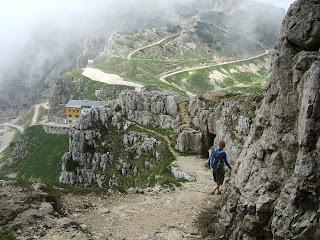 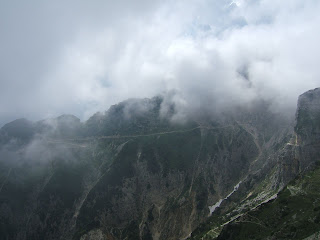 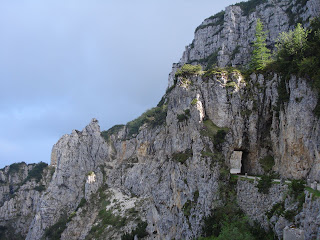 we walked it with a unit of +/- 30 U.S. Soldiers, and it was a good work out. Up through the tunnels and down on the road on the other side of the ridge.

I saw four goats, and others saw deer as well. I'd like to do it again in the snow.

Hello, This part of the dolomites used to be my childhood playground during summer hollidays; I'm half belgium, half italian from Recoaro Terme exactly (little village just next Valli del Pasubio).
This road is one the beautyfull road you can find around the location of Campogrosso, Valli del Pasubio and Pian delle Fugaze.
The two last tunnels leave the cliffs to became underground and go out right under the Refugio Papa. Or you can choose to walk throught the grass up the tunnels to arrive the same place.
On your way, during summer season, it's thrut you find sheep and goats on your way. If you look well after tunnels 40 and above, perhaps, you'll see some edelweisse (but please, don't touch, they are too rare).
The road of heroes (la strada degli eroi) continue the tunnels road for another 2 km with an elevation of +- 400m. The end of the road reach the highest point of the Pasubio that reach 2420 meter. By this road, you'll find an arch in stone buil in commemoration of ww1 alpine soldiers dead in these mountains. When on top, you'll find a quiet place where it's still possible to see trenches warfare and also, if you pay attention, some part of soldiers bones looking just like the typical white dolomites stones.
Near the entrance of the site, at "Pian delle Fugaze", there is a commemorative site named "Ossario del Pasubio" wich is a sepulture for numerous soldier of these battles.
Other great road just near the tunnels road start or end at the Campogrosso Refuge (Refugio Campogrosso) 5km distant from the start of the tunnels. the flowers road (vaio dei fiori), the colors road (vaio dei colori)that reach Cima Carega (m2480), the Sisila-Bafelan-Corneto road which pass through the dakk road (vaio scuro), a fantastic road throught a deep trench in the mountain are a few of the many beautyfull place you can find there.

This past weekend I did the via ferratta (Sentiero Altrezzato)and came down through the Strada merely by chance, whithout really knowing what I was in for. There was thick fog the whole day and I could never see more than 30 or 40 ft. ahead of me. What's more, I was all alone and didn't see a soul the entire day. Unless you count ibex, of course. The Strada was quite an experience, and, at least while alone and in inclement weather, was infinitely more unnerving than dangling from a steel cable a few hundred feet above the ground. As you said, be sure to bring a flashlight. And a friend wouldn't hurt, either.

I believe that in the picture of the Italian soldiers, the second solier on the left is my Italian grandfather from my mother's side:
Alessandro Sberze, born in the village of Valli del Pasubio (formerly Valli dei Signori).
The Sberze clan is still present in the area. In former years, so the legend goes, they were a band of smugglers {schwarzen (German)=
Sberze}.

I can confirm it is possible to descend the Strada on the bike (although prohibited - from time to time there are even police officers patrolling the car park).
The descent on the bike is an unforgettable experience. There are also many hikers in the opposite direction, so lots of caution is required).