Boris Johnson - his words are golden

Boris Johnson has a very good chance of becoming Prime Minister of Britain when the present incumbent, Mrs May, leaves. 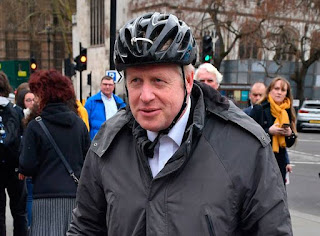 The UK's Independent newspaper has just reported that

"Boris Johnson was paid £40,000 an hour for giving a speech to an Indian magazine company, parliamentary records show.

The former foreign secretary received nearly £123,000 for a three-hour engagement with India Today on 2 March. Transport and accommodation were also provided by the New Delhi-based company, Living Media India Limited.

He was also paid £38,250 plus VAT by Citigroup for another two-and-a-half hour speech 10 days later, the register revealed. This means he earned more than £160,000 for the two addresses."

"Mr Johnson, the MP for Ruislip in west London, earns £275,000 a year for a weekly column in the Daily Telegraph in addition to his parliamentary salary of £79,468.

The latest register also shows he received an £8,000 donation from digger company JCB in March. It came a month after another £15,000 donation from the firm and two months after he gave a Brexit speech at its headquarters in Rocester, Staffordshire, in January, when he was given a further £10,000 donation."

The payments were also reported in the UK's Sun, Guardian and Daily Mail newspapers and by Bloomberg.

I have not been able to find any reports in the Daily Telegraph or on the BBC website.