Ups and Downs in India - a game for aspiring missionaries 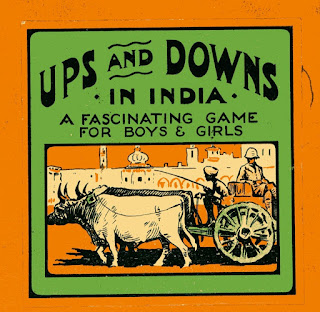 Ups and Downs in India is a Snakes and Ladders type board game. It was produced in 1930 by the Church Missionary Society. I have the board but not the box, tokens or instructions.

Players start at a British training college and then, after a bit of medical training its on the steamer to India. 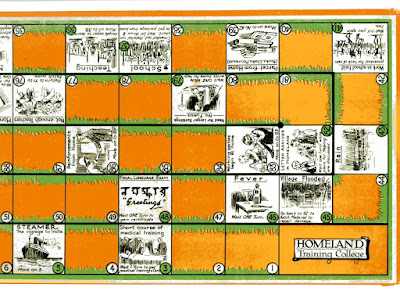 In square 59 the missionary uses a magic lantern show to make converts. I try the same thing when I am trying to recruit people to my Satanic cult. A quick puppet show, a few tunes strummed on my ukulele and they are ready to worship the Horned One.

Any trouble makers who don't sign up are stoned as in square 57. Nothing like a brick in a sock to persuade people to abandon their old gods.

Square 62 - Tigers and leopards used to kill a lot of people even in the 1930's.  In the early1930's Jim Corbett's shot the two man eating leopards of Kumaon [they had killed 525 people], the Champawat tigress [434 kills[ and the Man-Eating Leopard of Rudraprayag.  His books are well worth reading. He observes that by 1930 there were probably only about one tenth of the leopards and tigers there had been 40 or 50 years earlier.   Link

A missionary could have done more good with a big gun than a magic lantern. 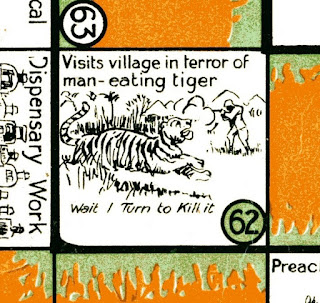 I am not sure how many young people wanted to become missionaries after playing this game. The pictures of shortages and sickness must have put some off. 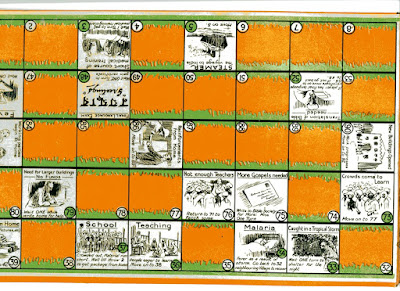 Apparently the Church Missionary Society thought malaria was caught from heavy rain. No mosquito nets visible in square 34. That is strange because Ronald Ross won a Nobel Prize in 1902 for discovering the link between mosquitoes and malaria in 1890. 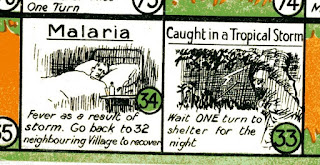 And then the happy ending. 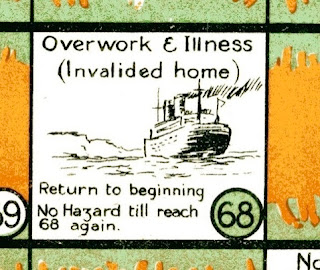 Email ThisBlogThis!Share to TwitterShare to FacebookShare to Pinterest
Labels: whimsy