Does Merkel have any responsibility, legal or ethical, for the migrants who drown whilst trying to reach Europe?

In the USA they have the legal concept of 'attractive nuisance'.

"The attractive nuisance doctrine applies to the law of torts, in the United States. It states that a landowner may be held liable for injuries to children trespassing on the land if the injury is caused by an object on the land that is likely to attract children. The doctrine is designed to protect children who are unable to appreciate the risk posed by the object, by imposing a liability on the landowner. The doctrine has been applied to hold landowners liable for injuries caused by abandoned cars, piles of lumber or sand, trampolines, and swimming pools. However, it can be applied to virtually anything on the property of the landowner."
The idea is that even if the children are illegally trespassing on your property and you have put up signs to warn them off you might still be liable for any injury they sustain.

If you substitute 'desperate people' for children and  'Germany' for 'swimming pool' you can see the relevance of the doctrine. 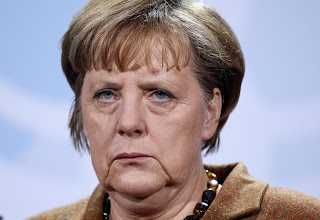 When Merkel announced an open door policy for migrants she created an attractive nuisance which was sure to draw both refugees from Syria and economic migrants from all over. Inevitably, many drowned whilst trying to cross the Mediterranean.

In the USA the attractive nuisance doctrine creates a civil liability, not a criminal offence. As far as I know there is no equivalent doctrine in Europe so Merkel is in no danger of paying for the  folly of her actions.

Merkel may be able to skip merrily away from her responsibility for migrant deaths but she should not be able to avoid the blame for the damage she has done to the European ideal.

She behaved with gross irresponsibility and has done immense damage to European unity. To take one example. The United Kingdom will soon be voting on whether we should continue in the EU or leave. The Eurosceptic arguments have been greatly strengthened by two pieces of evidence.

1. That the EU has been totally unable to deal with the migrant crisis. Its flabby response has been exacerbated by its most powerful member behaving with blind disregard for the common interest.

2. Germany has far too much power.

One thing is clear. Merkel must go. She has been able to stay in power so far because of a peculiarity of the German electoral system but the Germans must act to ensure that she goes ASAP.

How on earth did she not see that her actions would draw millions of the desperate, the greedy and the violent to Europe?  The British response to the Syrian refugee crisis is the right one. It has two parts.

1. Giving hundreds of millions of pounds to support people in refugee camps.

2. Only accepting migrants from refugee camps and then only people in certain categories, families and not violent young men in their twenties.

If German had adopted the same policy it could have taken as many refugees as it liked but avoided all the deaths and political damage.