Up to the Turquoise Lake [Rif. Vandelli Traverse] 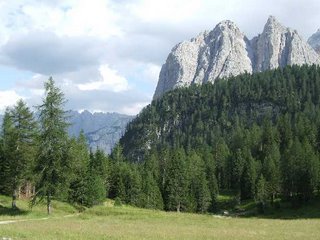 The proper name for the Turquoise lake is the Lago di Sorapiss. It is in the Italian Dolomites, to the east of Cortina.

The first part of the path starts at the Passo Tre Croci and was first established as a mule track in World War I. You pass a couple of overgrown forts, and then climb up through woods, and on a path that winds around the side of the mountain.

Cables have been set up where there is any exposure, but they are not really necessary. At one point there are a series of ladders to lift the path to a higher level. Most of the ladders in the Dolomites are pretty basic. Mainly of metal, but occasionally of wood. Often there are just stemples [rungs driven into a rock face]. These ladders are luxurious, with handrails and broad metal steps. 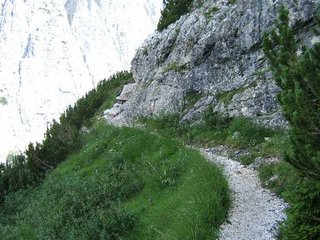 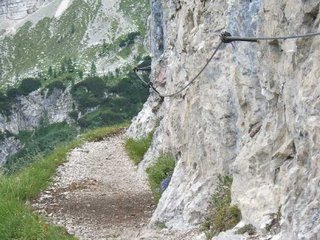 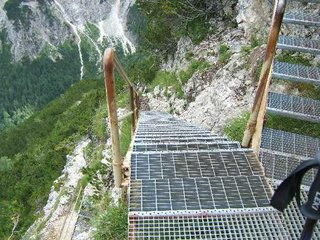 After about two hours you reach Refuge Vandelli where you can get food, drink and accommodation. 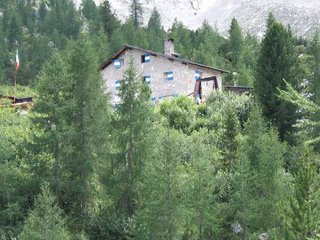 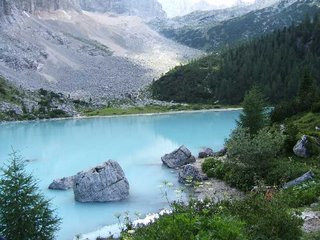 The lake is just a few minutes further along from the Refuge. The colour comes from suspended powdered debris from shrinking glaciers on the north wall of Punta Sorapiss.

The path continues on the other side of the lake, rising steeply and with some exposed stretches. There are supposed to be herdes of chamois in the trees above the lake.