After the success of the first two Jack Irish films they have started filming the third book, 'Dead Point'. Good news for all Jack Irish fans.  I hope they will then go on to 'White Dog'.

Very impressed by the 'Vikings', the new History channel production.  Everything about it is very well done and it is not surprising it has been renewed for a second season.  I think it is better than Game of Thrones. Fewer characters and a faster pace.

Travis Fimmel is superb as Ragnar Lodbrok. I think they are right to describe this as his breakout movie. 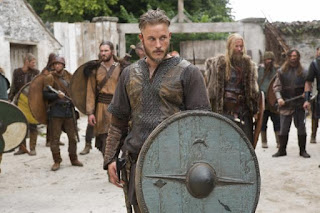 Michael Hirst is the writer. I think one of his sources must be 'The Long Ships' by Frans Bengtsson, considered by many to be a masterpiece of historical fiction.  It is well worth reading, don't be put off by the cover.