Bring back the Lynx

Britain has too many deer [about 1.5 million] according to this BBC report. 'There are now more deer in the UK than at any time since the last Ice Age.'  They destroy woodland and prevent its regeneration.  Anybody who goes around the British countryside can see for themselves how much damage is being done. 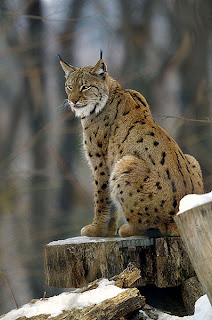 It has been suggested that a cull of  50% [750,000 deer] per year is needed to control numbers. The deer would be shot and the meat processed for human consumption.

In the short term shooting is probably the only option. In the longer term we might also reintroduce the Eurasian lynx.

The lynx, which disappeared from the UK around 1,000 years ago, could be reintroduced using animals captured in continental Europe. There are now populations living in Germany, Switzerland, Poland, Slovakia and France. The Eurasian lynx is a large animal and is known to have a taste for deer.


The reintroduction of the lynx to Scotland is supported by numerous conservation groups, including Trees for Life and the Scottish Wildlife Trust. Supporters point to the country's soaring deer population, which could be managed by lynx. It is estimated that just one of the cats would get through 50 to 60 deer a year.

Research carried out in Europe has shown that lynx eat far more foxes than they do ground-nesting birds, which is one of the fears expressed by estate owners and land managers.


Lynx are very shy animals so they are rarely seen. They do not attack people. Contrary to the alarmist nonsense of gamekeepers and farmers they are unlikely to attack sheep. They prefer to stay concealed in woods and don't like to go in open fields.

Lynx could only be as partial solution to the deer control problem If each lynx took 60 deer per year it would take a UK population of 12,500 to kill 750,000 deer.  Even countries such as Sweden and Finland, which have had lynx for a long time, are not thought to have more than 1500-2000.

Beavers and boars have become re-established in the UK, mainly by accident. There is no reason why the lynx could not return as well. No reason apart from the lack of political will.