Wartburg Castle is on a 1230-foot hill close to the town of Eisenach, in Thuringia, Germany. It is a UNESCO World Heritage site. In 2068 it will be a thousand years old. As you can see from the photograph below it is not a particularly impressive castle. Many other castles have more formidable walls; yet I believe Wartburg has never been captured. Its situation is its main defence.  It is a long and steep climb to the castle gate.

It has played a part in German history.  Martin Luther  came here after he was declared a heretic and sentenced to death by the Holy Roman Emperor. Luther grew a beard and called himself Jünker Jorg (Squire George) hiding under the protection of a German prince. He spent his time in translating the Bible into German.

In the Troubadours' Hall  of the Wartburg in 1206 Count Hermann I of Thuringia and Saxony  declared a  competition of the best minnesingers of Germany (the Meistersingers). The loser was to be put to death but by magical means he escaped. Wagner based his opera Tannhäuser on this story. 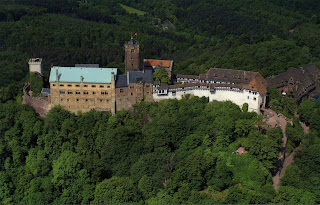 There is a guided tour of the castle interior.  It is in German but there is an English language booklet you can obtain. 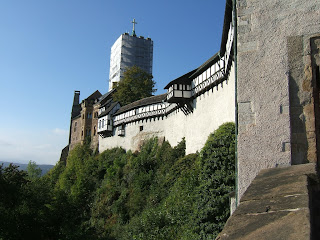 The castle is in the middle of the Thuringian Forest or Wald. Some of my ancestors came out of this forest many centuries ago and moved to colonise post-Roman Britain. The 170km long Rennsteig high level forest trail begins  in nearby Eisenach. 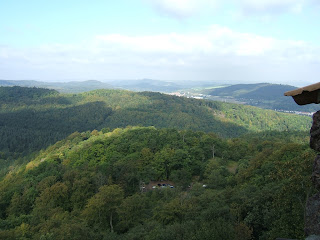 The castle interior is fairly interesting. One room is entirely covered by mosaics. 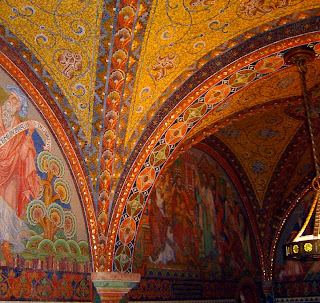 Rating - worth visiting if you are nearby. Not worth travelling any distance to visit.