The canal boat lift at Strépy-Thieu

The Strépy-Thieu boat lift is on the Canal du Centre in Belgium. It is the largest boat lift in the world and is capable of lifting boats through a height difference of 73.15 metres (240.0 ft. 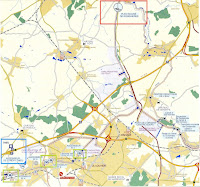 It was completed in 2002 to replace two locks and four 16-metre lifts. A new canal was dug to bypass the old locks and lifts. The old lifts are now UNESCO World Heritage sites. I have written about them in this post. The old lifts could pass boats of up to 300 tonnes. The lift at Strépy-Thieu can cope with boats of up to 1,350 tonnes and traffic on the canal has increased ten fold.

The lift is huge and dominates the flat Belgium countryside. It is visible from the Ronquieres Inclined Plane, an equally remarkable piece of canal engineering.

There are two independent caissons, each massing up to 8,400 tonnes. In the photograph below you can see both caissons. The white blocks below the left caisson are counterweights.

Like the nearby Ronquieres Inclined Plane the lift is promoted as a tourist attraction. You can take a boat ride through the lift and also tour the insides. I did not do either. You can see most of what is interesting from walking around outside. 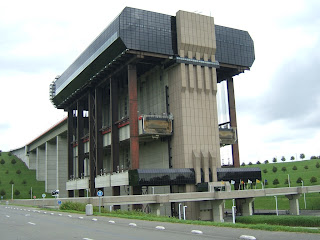 Email ThisBlogThis!Share to TwitterShare to FacebookShare to Pinterest
Labels: canals

I've been through the Panama Canal many times... This is a cute little thing you are showing here... LOL