Belgium does not have many World Heritage sites. The historic centre of Brugge is probably the best. The Béguinages are also noteworthy.

On a recent drive from Germany to the Channel Tunnel we decided to stop at another of Belgium's UNESCO World Heritage sites, the boat lifts on the Canal du Centre.  I like this kind of old technology.

The short [20.9 km] Canal du Centre was built to connect the Meuse and Scheldt. Unfortunately, there is a considerably height difference between the two rivers. At the western end of the canal they built six locks to raise boats by 23m.
That left an height difference of 66m. This is  too much for locks. Enter a British engineer who built four boat lifts, which are now World Heritage sites.
The lifts are marked by yellow pins in the photograph below. We visited the lift at Pont de Houdeng. 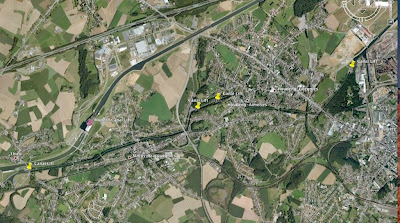 A boat lift is a simple contraption. There are two metal tubs [or caissons], each large enough to hold a canal boat, which can be raised or lowered. One is held level with the upper canal and the other with the lower canal. Both are filled with water.

A boat that has to be raised is put in the lower tub and displaced a weight of water equal to its own weight. Both tubs now weigh the same. The lower tub is now raised using a little power, most of the work being done by the weight of water in the upper tub as it descends.
It is all very mechanically efficient. You can see two tubs in the photograph below. They have both been lowered for restoration work. 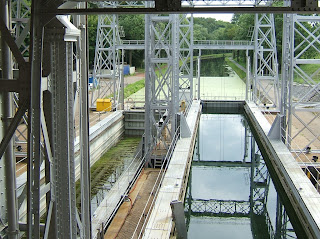 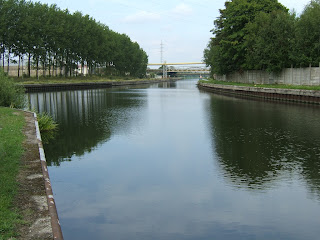 Strépy-Thieu
To preserve the historic boat lifts the Belgians have dug a bypass canal to the north of the original route and built the worlds largest boat lift at Strépy-Thieu. This can raise or lower boats through 73.15 metres (240.0 ft). Strépy-Thieu has the world record, but not for long. In China they are building an even bigger one as part of the Three Gorges Dam project.
Strépy-Thieu is now a tourist attraction and you can buy a ticket to ride the lift.  In Scotland the Falkirk Wheel boat lift was built replace eleven locks in connecting the Union and Forth and Clyde canals. The Falkirk Wheel is smaller than Strépy-Thieu but a much more attractive design. It has also become a tourist attraction.
The Ronquières Inclined Plane
The area has still one more piece of canal technology. On the map below the old canal lifts are marked by blue pins and Strépy-Thieu by a red pin. If you look in the top right corner you will see a yellow pin. This marks the location of  the Ronquières inclined plane. 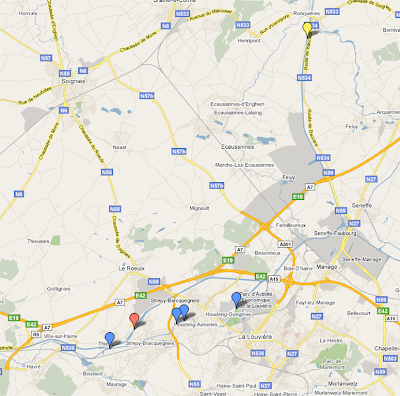 This is a weird device. Canal boats are floated into a metal tub [caisson] and then the is tub is dragged up an incline to the upper canal. Even with a counterweight this must use a lot of power and not many of these have been built [note - the two photographs of the inclined plane are not mine]. 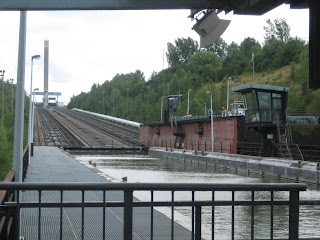 I visited Strépy-Thieu and the Inclined Plane on a later trip through Belgium. You can see my posts on the visits by clicking on the canals tag on the right.

You would LOVE the Panama Canal, Roger!!

I have read a couple of books on the building of the Panama Canal, the shambolic French effort and the successful American completion.

The secret was controlling malaria.
Tens of thousands of workers died during the French period. For several years the French company's main source of income was selling the pickled bodies of workers who had died of malaria to European and American medical schools.