In the mid 19th century the Midland Railway company wanted to connect London with Manchester by building a line through the Peak District. After many ups and downs the line was built and opened in 1863; running through some of the most beautiful countryside in England.

The line closed in 1968 and an 8.5 mile section of the trackbed has been converted to a trail. Some £3.785m has been spent on opening three tunnels, making them safe and providing lighting. 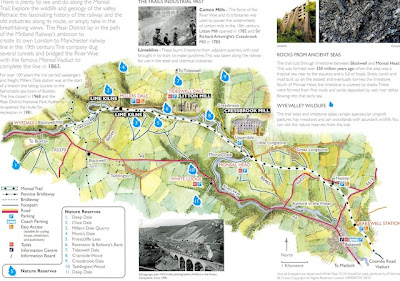 The trail is very popular because it passes through some magnificent countryside, including Monsal Dale and Millers Dale. It was busy with walkers and cyclists when I walked it from east to west in the summer of 2011. On the way back I crossed over the river to walk back to my car. On the way I passed two old cotton mills.

Both Cressbrook Mill and Litton Mill have been converted to residential accommodation. Litton Mills has a dark history. The owner took orphans from the big industrial cities and so abused them that many died. Cotton mills used a lot of child labour and many mistreated the children; but Litton Mills was particularly bad. At the other end of the child labour spectrum was Robert Owen's New Lanark mills where conditions were excellent. Long hours and bad conditions were not an economic necessity as many mill owners claimed. Owen treated his young workers well and the New Lanark Mills were consistently profitable.

As an experiment I have included some photographs as an animated gif. I am not sure if I will repeat the experiment.