Why is Google short-changing Wikipedia? 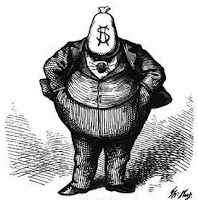 Google gains a lot  from Wikipedia. People use search more if they find good stuff. The more they use search the greater Google's scope for showing them advertisements.

If they don't find good content then they will use search less and Google's bottom line will suffer.  Thats is why Google funds services like Blogger, it creates good content. Otherwise, all searchers would find would be spam and articles from the content farms.

Wikipedia millions of articles  appear early Google's results pages. In many cases a Wikipedia article  will be right at the top of a Google results page.  Giving money to Wikipedia helps Google's users get what they want. That keeps users searching and makes a lot of money for Google.

Given that Google makes so much money from Wikipedia it is disgusting that, so far, they have only donated $2 million to Wikipedia.

In 2009 Google made a profit of $6.5 billion, but all they could spare for Wikipedia was $2 million.  What a bunch of pitiful gripe farthings. They should be giving Wikipedia a minimum of $20 million a year.

Not only have Google been short-changing Wikipedia, they even tried to start an alternative encyclopaedia called Knol. That  failed and now appears to be dead in the water.

Google needs to move away from its current greedy ways and be more socially responsible. It needs to demonstrate that it is a good internet citizen.  That should be easy when it is clearly in its own financial interest to encourage services like Wikipedia.

P.S.  Google has announced that it is giving a $100 million equity award to departing CEo Eric Schmidt.

Do you remember  Google's 'Don't be evil' motto'?

Should it have been, 'Don't be greedy little shits'?

I wanted to be sure you saw this: http://mediadecoder.blogs.nytimes.com/2011/01/24/google-and-mozilla-announce-new-privacy-features/?ref=technology

I agree with you, Roger, that Google needs to give back... And I adore Wikipedia... It's often my first stop when looking up info through my Android mobile...