How do you make politics interesting and intelligible to ordinary people? One answer is to use humour. In the USA Jon Stewart follows this approach. Hard politics that many might find boring are made entertaining as well as informative with a sugar coating of humour. 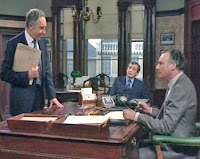 In the UK Antony Jay and Jonathan Lynn did it with a TV series called 'Yes Minister' that ran for 21 episodes from 1980 to 1984.  It was set in the private office of a government minister called Jim Hacker and described how his plans were frustrated, and he was outwitted and manipulated, by a cunning senior civil servant called Sir Humphrey Appleby.  The sequel, Yes, Prime Minister, ran from 1986 to 1988.

Yes Minister was very funny and  immensely popular. There had been nothing like it before and it did more to educate people in the realities of British politics than any number of earnest political programmes.

I remember listening to one of the authors describe how they got the inspiration for the programme from the following true story.

There was a British Member of Parliament whose party were in opposition. He felt strongly about a particular issue and decided to campaign to try and get the government to change their policy. He made speeches, wrote articles etc. He also worked hard on a petition. He collected many signatures and presented his petition to Parliament, .

Then there was an election. The M.P. won and so did his party. They formed the Government. The M.P. was appointed to the Government, to the Ministry responsible for policy related to his petition. Soon after appointment he rejected his own petition.

This made Jay and Lynn realise that there must be some hidden hand manipulating political events, somebody who never appeared in public but was able to control what happened. In 'Yes Minister' the hidden hand was the devious Sir Humphrey Appleby.

When politicians do bizarre things I often wonder what hidden hand is at work.