This is part of Omaha Beach, the site of the most heavily contested of the five D-Day landings. This section of the beach witnessed the heaviest fighting of the entire day. 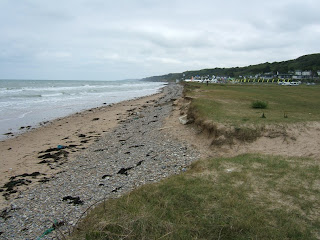 I was surprised when I saw the beach. I suppose I expected something like the beach and high cliffs in  'Saving Private Ryan'.  However, the opening scenes in that film were probably based on the assault on the gun emplacements at the Pointe du Hoc.
As you can see there is a flat stretch of land behind the beach, then a low hill. The American cemetery is the other side of the crest of the hill. (British Empire dead are mainly buried in Bayeux.) 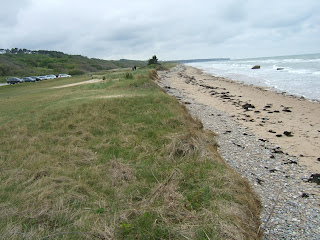 There are a few German blockhouses on the hillside. One curious thing was that a notice on the site said that there were only 48 German soldiers on duty when the invasion fleet landed.
Two strips from the Overlord Tapestry [btw - the Bayeux Tapestry is on exhibition in a museum in Bayeux.]