A visit to the saltworks at Salins-Les-Bains

In 2009 I visited the historic salt works at Salins-Les-Bains in eastern France. The salt works have recently been added to the list of UNESCO World Heritage sites [UNESCO citation]. They are closely associated with another World Heritage site, the Royal Saltworks at Arc-et-Senans [Wikipedia article]. We did not visit Arc-et-Senans, this post is just about Salins-Les-Bains. 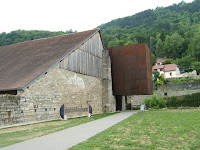 This is just a trip report. I am not going to go into any great detail about salt production or the long history of the site.

Salins-Les-Bains is a small and undistinguished French town. The salt works are the only reason a tourist would visit the town. We found it easy to find free parking near the salt works museum. 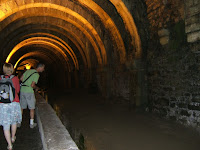 After a short wait for lunch to end we joined a party of about 40 people for a tour of the site. The tours are given in French, but we were given a well written four page handout in English. There are also lots of maps and models, so it is easy to work out most of what happened in the works.

Brine was pumped up from large salt deposits 246 metres below the town and the water was then evaporated in wood fired open baths. 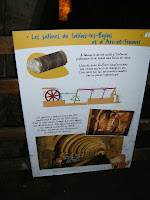 The salt works were first mentioned in the eighth century and continued in operation until the mid twentieth century, so there is a range of technology on display. We started in some underground works with primitive pumps and then moved on to some more recent surface works. These mainly consisted of a series of very large open evaporation baths which were heated by wood.

The evaporation process was very wasteful of energy and by 1791 the works had just about deforested the area about the town. The solution was to build a new saltworks near the immense Chaux Forest. 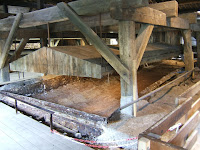 Salt was very important for food preserving and was sometimes referred to as ‘white gold’ because of its value. Some idea of its value can be seen by the fact that they were willing to pipe the salt water from Salin-Les-Bains to the new Royal Saltworks at Arc-et-Senans through a 21 kilometre long wooden pipeline. I find it astonishing that a wooden pipe of that length could be built and maintained.

Is it worth visiting Salins-Les-Bains? As Samuel Johnson said [of the Giant's-Causeway],  "Worth seeing, yes; but not worth going to see."

At least not yet and not just the one site.

The tour was well done and the museum interesting enough, but the main problem is that the industrial process of salt extraction is a very simple one. Brine is pumped to the surface and the salt extracted by evaporation. That is it.

I think Salins-Les-Bains is only worth visiting if you happen to be nearby and you have the time to visit both the Royal Saltworks at Arc-et-Senans [see image above on left] and Salins-Les-Bains [below]. The museum could be improved by more information on the importance of salt and its uses. It would also be interesting to see something on the forestry works that must have been needed to fuel the saltpans. 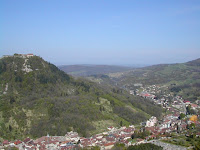