Plants that changed the World 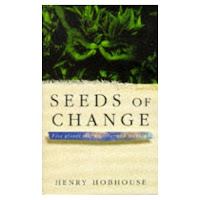 Many years ago I stopped off in Fiji on my way to Australia.   What struck me most were the differences between the two groups that inhabit the islands.  The native Fijians are Polynesians who came to the islands before 1000 BC. They had exclusive use of the islands until the late 19th century when indentured labourers from India  were brought to the islands  by the English  to work the sugar plantations.

The two groups are physically and culturally very different, and do not get on at all.  The unstable society that now exists is a product of the island's sugar industry.  It is an example of how a plant has changed a society.

One can also think of the movement of Africans to the Caribbean to produce sugar, and to North America to work on cotton plantations.

Historians tended to ignore  the effects of plants on human history until 1985 when Henry Hobhouse wrote 'Seeds of Change'. This book looked at five plants that had significantly changed the world, both politically and economically.

"The secondary title of Seeds of Change was Five Plants that Transformed Mankind and these were Quinine, that allowed Europeans to dominate the Tropics; Sugar, that changed the Caribbean population from Red Arawaks and Caribs to White Masters and Black Slaves; Tea, that inter alia, led to the destruction of classical China through the use by traders of opium in exchange for tea; cotton, that, like sugar in the Caribbean, led to a slave-economy in the Southern United States; and finally, the Potato, which produced huge increases in the Irish population and, when disease struck the potato, famine followed as did the greening of some of the United States.

A new edition has an extra chapter: Coca: how an Andean boon became a scourge on the streets, which tells the story of the Andean use of coca leaves and of the abuse of the modern concentrate, cocaine, which has harmed so many."

In 2003 Hobhouse produced another book, 'Seeds of Wealth', which covered a further four plants. The book was subtitled, Four Plants That Made Men Rich'. A later edition added a fifth plant, coffee.


"The chapter on timber is titled The Essential Carpet. In it, Hobhouse discusses how the shortage of timber in the United Kingdom led to the use of coal, which led to scientific advances and ultimately to the industrial revolution. On the other hand, the abundance of timber in the USA spurred the westward march of the country during the 1800s.


In The Grape's Bid For Immortality, the author discusses the growing of vines and making of wine from 600BC to the present. Wine has an enormous potential for the creation of wealth, multiplying profits wherever it is successful.

In the chapter Wheels Shod For Speed, he tells the story of rubber and how it changed the economies of Singapore, Malaysia, Indonesia and indeed the world.

More Than A Smoke is a fascinating account of how the colony and ultimately state of Virginia owes it wealth to tobacco. Initially this area had a monopoly on tobacco by decree of the king of England. This industry created a landlord class, which amongst them counted certain signatories of the Declaration of Independence, like Washington and Jefferson."

Hobhouse, H., 2006b. Seeds of Wealth: Five Plants That Made Men Rich, Shoemaker and Hoard.

Both are fascinating books.