Newspapers which are suffering from the effects of the internet may be saved by electronic paper. Instead of being in a long term death spiral it may be more accurate to view newspapers as living through a  period between the introduction of the internet and the adoption of the more benign technology of electronic paper. Only 15% of a newspaper's costs are for journalism. The need to handle paper [printing. distribution etc.] account for much of a papers non journalism costs.

The costs of newsprint

[BTW - That sounds a lot but at a planting density of 2,000 trees per acres it equates to 1,940 acres or just over 3 square miles of forest cleared per year. A forest area 10 miles square would provide enough wood pulp for the Sunday edition from now until 2042.]

Even if vast areas of land are not being clear felled handling all this wood and converting it to newsprint is a very expensive business.

"Readers expect a daily paper to be a certain size every day, and to arrive on their doorstep at a certain time every morning. Meeting those requirements involves a ton of infrastructure and personnel: typesetters, printing presses, delivery trucks, paper carriers, and so forth. To meet these infrastructure requirements, a paper has to have a minimum circulation, which in turn requires covering a wide geographical area. All of which means that as a daily paper's circulation falls below a certain threshold, it can lead to a death spiral where cost-cutting leads to lower quality, which leads to circulation declines and more cost-cutting."

Electronic paper
E-paper technology is advancing very rapidly. We already have e-readers like the Kindle and the iPad. I do not think it will be very long before we are able to buy A4 or even A3 size sheets of flexible e-paper.  We would then be able to use e-paper to read our newspapers [and lots of other stuff]. 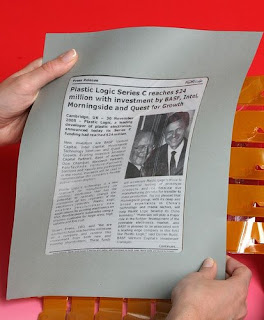 Newspapers are having a tough time at the moment as they are abandoned by readers and advertisers. However, in the long term they stand to save huge sums if journalism is read on e-paper rather than newsprint. Just think of the savings in newsprint, printing and physical distribution.

At the moment newspapers have to cater for readers who want a paper copy of their paper and those who are content to read on a screen. They cannot make money from either group and many are closing or cutting staff.

Eventually they will come to a tipping point where the number of e-readers equals the number of paper readers.  After that I suspect that buying a paper newspaper will become more expensive as newspapers try to move all their readers to e-paper.

Not only will delivery through e-paper greatly reduce newspaper's cost, it will also provide a charging mechanism. Though people are unwilling to pay for content on the internet they do seem ready to pay for it if it is delivered through a mobile device. Witness the sale of newspaper subscriptions on Amazon's Kindle and software on Apple's Apps Store.

Once the costs of printing disappear newspapers will have very different economics. The ones the survive these transition times may find themselves profitable again. Especially since some of their competitors will have disappeared and they will be able to sell their e-paper editions on a global scale in a way that was not possible with paper newspapers. They will probably also have to sell off office blocks and convert to virtual newsrooms, and rely more on occasional contributors. The end result will probably be something closer to the model of the Huffington Post than the current New York Times.

There will be victims of the move from newsprint to e-paper.

During the First World War Britain ran very short of trees for pit props and trench supports. To prevent this problem arising again the government planted lots of quick growing evergreen trees. However, the Second World War was not a trench war and all over Britain there are these WW1 woods that do not have much economic value. I live near one.