In August 1798 a British fleet under Rear-Admiral Horatio Nelson inflicted a crushing defeat on a French fleet moored in Aboukir Bay, Egypt. The French lost fourteen ships and had 1700 seamen killed. The Battle of the Nile cut Napoleons Egyptian expedition off from France, and removed the threat to Britain’s position in India. It was one of the British Navy’s greatest triumphs.

To commemorate the victory Charles Douglas, 6th Marquess of Queensberry, planted clumps of beech trees on his estate near Amesbury in the south of England. Each clump of about 200 beech trees marked the position of a British or French ship at a particular moment in the battle. These woods are called the Nile Clumps. The trees are to the north-west of Amesbury, on either side of that stretch of the A303 that lies between the  A345 and the A344.  The site is quite close to Stonehenge. 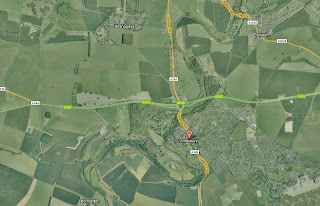 The two fleets still sail across the Downs, but in a sadly depleted state. Beeches last about 200 years and many of the original trees have died or are dying. Some clumps were lost when the A303 was built. Others have been destroyed by farmers.

In 1990 The Amesbury Rotary Club replanted one clump as part of National Tree Week.  This was so successful that they got more funding and eventually replanted a total of fourteen clumps. An article in the UK's Weekend Telegraph newspaper of the 20th June 1998 described the replanting project. See the end of this post for a copy of the article.

On  Thursday 11th Apr 2002 the Amesbury Journal,  reported that

"Trees planted on the outskirts of Amesbury more than 200 years ago to commemorate Nelson's victory at the Battle of the Nile are now under the protection of a preservation order.

The order was confirmed by Salisbury district council this week, following a lengthy process to ensure the Nile Clumps, as the trees are called, are given the profile and protection that their history demands.
Each clump of trees represents the strategic position of English and French ships at the height of the epic 1798 battle."

In July 2008 I visited the site and took some photographs. I also visited the Information Centre in Amesbury Library and they provided me with the map below. I talked to Tony Lester-Card who was the organizer of the first restoration of the clumps. 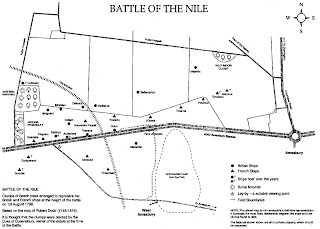 The map [author and date unknown] shows the location of 26 'ships'.  Seven of these are marked as having being 'lost' over the years and nineteen as remaining. It does not show the five clumps which were lost when the A303 was built.

Marked as lost on map


Marked as surviving on map

I examined an aerial photograph [from Google Maps] and could only find fifteen 'ships' remaining.  I think they are the ones I have indicated in the list above. It appears that in the period between the map being prepared and the photograph being taken a further four 'ships' have been lost. 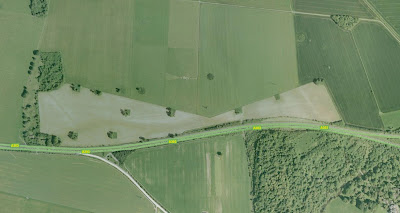 I took these photographs in July 2008. 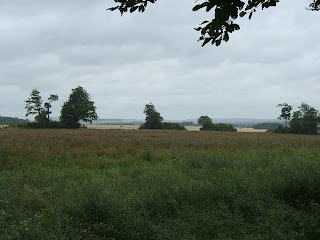 Several of the clumps. 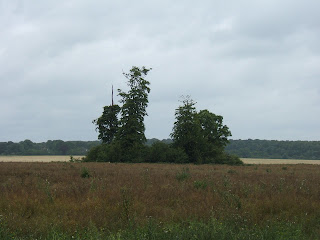 You can see that only a few of the Franklin's original beeches remain.  You can also see the new trees that were planted by the Rotary Club of Amesbury. 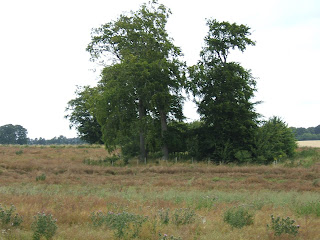 The Franklin's clump has been protected by fencing 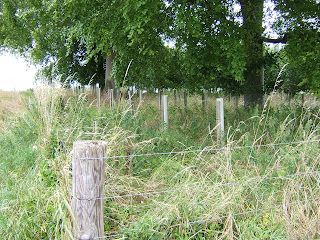 If you look closely at this  photograph, and the one above, you can see that some of the new plantings have succeeded, but others do not appear to have made it out of their plastic tubes 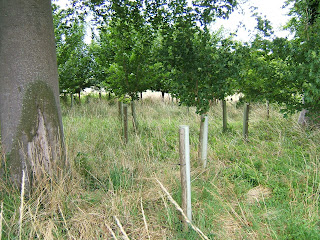 Another view of the Franklin Clum 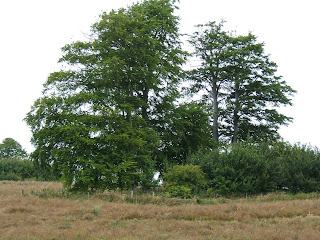 
What do we need to do to preserve the Nile Clumps?

The fifteen clumps visible in the aerial photograph.
The four clumps marked as surviving on the map but not visible in the aerial photograph.
The seven clumps marked as missing on the map.
The five clumps lost when the A303 was widened [representing the Leander 50 [B], Mutine [B], Genereux 74 [F], Guillaume Tell 80 [F] and the French frigate Justice of 40 guns. I identified these ships by comparing the list above with a list of the ships present at the battle.

Tony Lester-Card estimated that there were 70-90 beeches in each clump. If we take the higher figure and assume that all the clumps had to be replanted the exercise would involve planting no more than 2790 trees [plus a number of maples and hawthorn].  This is trivial compared to the Trafalgar Project which involves creating a series of woods across the UK, with each wood representing a ship that was present at the Battle of Trafalgar. The Victory Wood in Kent will consist of 100,000 trees.

2.   Convert the surounding land to grassland
Most of the restored trees are on Countess Farm owned by The National Trust  and farmed by Neil Morrison. At the moment the land around the clumps is being farmed. This obstructs access to the surviving clumps and  makes it difficult to replant the lost 'ships'. The National Trust  is planning to let some of it revert to grassland.  It needs to acquire the remaining land and convert it to grassland.

The London Daily Mail has an article about the site and it notes that the National Trust has launched a campaign to promote the memorial as a tourist attraction for visitors to Salisbury Plain. Though, nonsensically, the journalist claims that the Clumps were 'discovered' on Google Earth.

I hope the next step will be to re-plant some trees and restore the missing clumps. The National Trust  have applied for planning permission to carry out work on some of the clumps. It may be necessary to acquire other land by compulsory purchase. It obviously cannot remain in agricultural use if the site is to be developed. Ideally, the site should be returned to grassland and the public given full access to wander.

"This is not the only wooded tribute to the Battle of the Nile. On the former Swarland Estate near Alnwick, Northumberland, a line of trees takes the shape of the coastline of the Nile delta. Other trees appear to be in the positions of the British and French fleet."

These are Davison's Woods. You can read about them here.  I visited them a few years ago and they are in an even more neglected condition than the Nile Clumps. An obelisk had been restored, but the woods had not 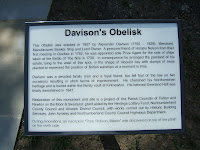 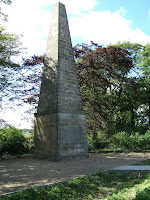 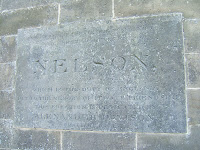 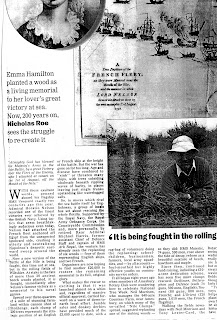 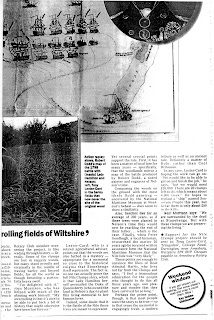 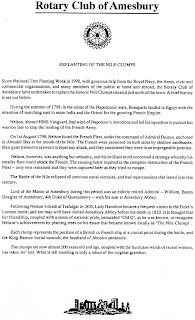 The positioning of the Clumps is supposed to be based on Dodd's map of the battle. 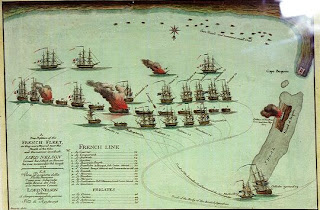 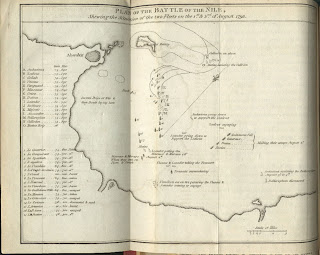 I wonder if the Clumps are positioned according to Dodd's map.  The Duke of Queensberry was a retired admiral and I would suppose he would have spoken to several naval officers who had been at the battle. I would not be surprised if he drew up his map according to their recollections. It has been suggested by a local historian that Captain Thomas Masterman Hardy supervised the planting of the clumps.

Search this site on 'naval' for other posts on the Nile Clumps and other naval woods.

Anonymous said...
This comment has been removed by a blog administrator.
11:11 am

The trees are to the north-west of Amesbury, on either side of that stretch of the A303 that lies between the A345 and the A344.

Anonymous said...
This comment has been removed by a blog administrator.
1:12 pm

A very informative article. The Wikipedia article on the Clumps is crap.

I hope the Clumps do get restored.