The Nile Clumps, Davison's Woods, the Trafalgar Woods and the Jutland Woods

In august 1798 a British fleet under Rear-Admiral Horatio Nelson inflicted a crushing defeat on a French fleet moored in Aboukir Bay, Egypt. The French lost 14 ships and had 1700 seamen killed. The Battle of the Nile cut Napoleons Egyptian expedition off from France, and removed the threat to Britain’s position in India. It was one of the British Navy’s greatest triumphs.

To commemorate the victory Charles Douglas, 6th Marquess of Queensberry, planted clumps of beech trees on his estate near Amesbury in the south of England. Each clump of about 200 beech trees marked the position of a British or French ship at a particular moment in the battle. These woods are called the Nile Clumps. The site is quite close to Stonehenge. 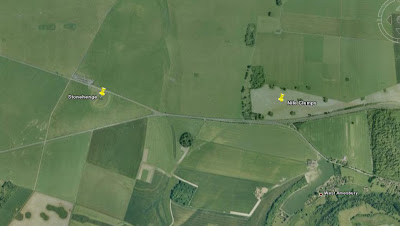 Davison's Woods
Alexander Davison, who was Nelson’s friend and agent, built an obelisk on his estate at Swarland in Northumberland to commemorate the Battle of the Nile. He also planted what are called the Nile Woods just to the west of the obelisk. Trees have been planted to indicate the coastline of Aboukir Bay and the positions of some of the key ships. 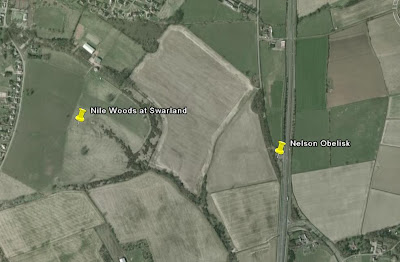 The road that runs north - south to the right of the obelisk is the AI. Below is a better aerial photograph of the woods from Microsoft's maps site. 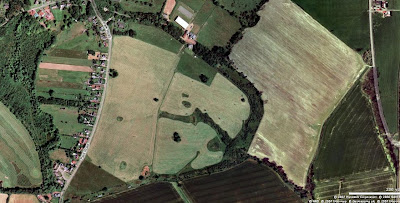 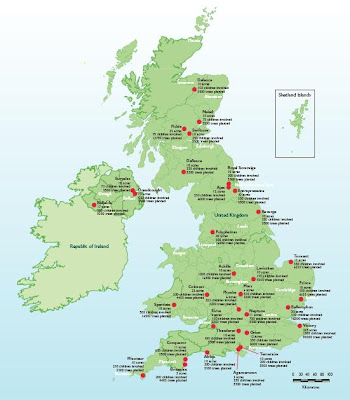 I like this idea of planting woods to commemorate some of Britain’s great victories. However, this kind of project should not be left to volunteers. We need a national body to become involved and government money to be spent to ensure the Nile Clumps and Nile Woods are restored to their former glory. Money is also needed to ensure that the Trafalgar Woods project is completed. I would like to see this done for historical reasons, but there would also be a practical payoff. At the moment very few people know of the Nile Clumps and Nile Woods. If they were restored and publicised they could become significant tourist attractions.

It also occurs to me that we could plant a wood to commemorate the World War I Battle of Jutland. This was easily the most decisive naval battle in Britain’s history. If we had lost the Battle of Jutland the Germans would have won control of the seas. The war would have ended immediately because the supply line from Britain to France would have been cut. The British Empire would also have ended because the Germans would have been able to blockade and bombard Britain’s ports until we surrendered. It was a strange battle. If the Germans lost, they lost little because their High Seas Fleet had been blockaded in port. If our Grand Fleet lost, we would have lost everything.

We do not hear much of the Battle of Jutland because our losses were greater than the Germans. The public, who had little understanding of strategic realities, expected another Trafalgar. However, Jutland might have been a tactical defeat for Britain, but it was a strategic victory. We remained in control of the seas and continued the blockade of Germany, resulting in their eventual defeat [and the deaths of one million Germans from disease and starvation].

How great it would be to commemorate this battle by planting a Jutland Woods. We want to plant more trees, why not plant them in this way.