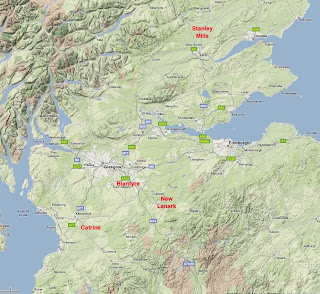 David Dale was a Scottish entrepreneur who was instrumental in establishing Scotland’s cotton milling industry. He was born in Ayreshire in 1739. In 1783  he met Sir Richard Arkwright, the inventor of the spinning frame, at a dinner in Glasgow. Next day the pair went to the Falls of Clyde to see if the power of the Clyde could be harnessed to power a cotton mill.

Their visit led to the building of New Lanark, with four mills and housing for workers. The mills operated very profitably. Later they became famous because of the social experiments conducted there by Robert Owen, who was Dale’s son in law. They closed in 1986. New Lanark has been designated a World Heritage site by UNESCO and attracts hundreds of thousands of visitors each year. 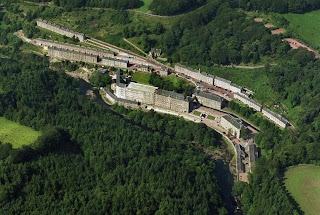 Dale was involved in a number of other mills.

Blantyre Mills were established in the 1780’s by David Dale and  James Monteith.  The mills continued in operation until 1904. Now, all that remains is a single housing block. This was the birthplace of David Livingstone and the building now contains the David Livingstone Centre and some reconstructed mill workers accommodation.

Catrine was a small village in Ayreshire until Dale and Claude Alexander built a cotton mill there in 1787[see the separate post on Catrine].

Spinningdale was a small mill built by Dale, in partnership with George Dempster, in around 1790. It was intended to relieve local unemployment but the highlanders employed in the mill kept going off to work on lambing, harvesting and cutting peat. When the mill burnt down in 1806 it was not rebuilt. 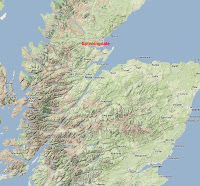 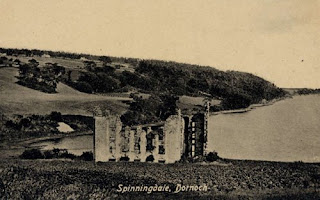 Stanley Mills had been built in 1784 by Richard Arkwright to harness the power of the Tay. Dale only became involved later and supposedly lost a lot of the money he invested in the mill. Stanley Mills continued in in business until 1989, latterly as a jute mill. The buildings are now being restored. See my post on Stanley Mills. 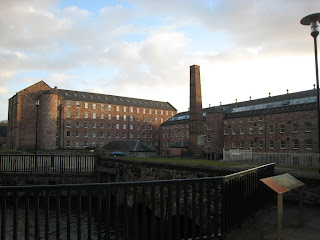 All the mills had three things in common.

Highlanders - At the time that Dale was building his mills people were very reluctant to work in factories and a lot of Dale’s workers were highlanders who had been dispossessed by the The Clearances.

Water Power - The situation of the mills emphasises the importance of water power. New Lanark and Blantyre were built by the Clyde, Stanley by the Tay, Catrine by the Ayre.  Spinningdale harnessed a burn. With the exception of Spinningdale all the mills were inland and in remote locations. Raw cotton would have had to have been shipped to a Scottish port, unloaded and carted to the mills. Then the finished products who have to have been carted away, some back to ports for export. The shipping costs must have been enormous, but insignificant compared with the benefits of water powered milling.

At New Lanark and Catrine reservoirs were built to store water so that the mills could continue in operation even in summer. Long tunnels were cut through rock at New Lanark and Stanley to carry  water to the mills.

Social Conditions – The conditions in some cotton mills were appalling. Many employed child labour and treated the children very badly. There were high death rates. Dale cared about his workers and provided good accommodation and decent working conditions. New Lanark had particularly good housing, the first working class school in Scotland and The Institute for the Formation of Character.

Dale's mills started the industrial revolution in Scotland.   They also introduced the factory system and changed the ways in which people lived and worked.

Eli Whitney and his cotton gin


In the late 18th century America had a lot of land which was suitable for cotton growing but the only plant variety that would grow in America had a serious disadvantage, a lot of seeds were mixed in with the cotton. So much so, that plantations had to employ at least 15 people on seed extraction for each person who picked the cotton. 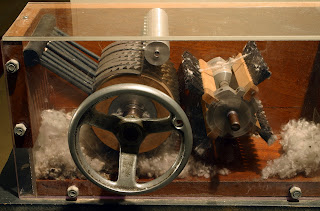 Whitney invented a simple but effective machine which stripped out the seeds so readily that one person could complete the work that had previously required fifty.

Cotton growing suddenly became very profitable and the South went from exporting 487,000 pounds of raw cotton to England's mills  in 1793 to exporting almost 128 million pounds in 1820. This availability of cheap cotton lead to a great expansion in cotton milling.

A side effect of the cotton gin and the expansion of  cotton growing was an increase in the demand for slaves to work the plantations. 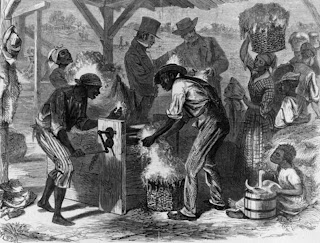