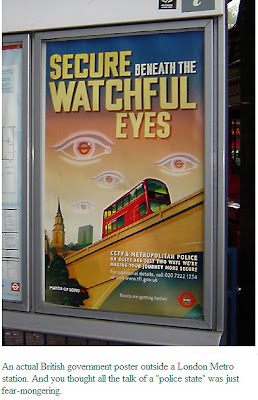 A whistleblowers guide contains advice on how to blow the gaff on government misdeeds without being outed by Britain’s secret police agencies.

The guide contains a lot of well considered and useful advice.

For example, if you plan to telephone your story to the media.

“Ever since the days of IRA or INLA bomb attacks and fake bomb hoaxes, all  public phone boxes can be pin-pointed within seconds (often before the phone call has finished) if they are calling certain phone numbers, including all the main newspaper, tv and radio stations.

The same is true for 999 Emergency Service calls, which show up immediately they are answered, on a touch screen graphical information system map.

If you plan to hand over documents to a journalist.

Choose your photocopier carefully. Many photocopiers, especially colour ones, have built in anti-counterfeit US currency routines in the software. Many also have hard disks which record a copy of all ducuments copied on the machine.

Some combined photocopiers and printers are capable of printing tiny yellow serial numbers (e.g. Canon) on each sheet or a special series of dots (e.g. Xerox DocuColor, which makes tracing which machine was used to help to "leak" a document, if the original printout or photocopy is seized, quite a bit easier.

Many typewriters, computer printers and photocopiers do leave characteristic wear and tear imperfections on the documents they produce, which a forensics laboratory may be able to match to a machine a work or your personal machine at home, if it is ever seized as evidence in a "leak inquiry".

“Your source or the "anonymous" publisher of a leaked document online may use a scanner to copy the document, but they may instead  use a smart phone or digital camera.

There is  make / model identifying EXIF metadata embedded in the  digital images taken by most types of  camera. These may be used as evidence if your camera is seized during a leak inquiry investigation.


There is even facility for Global Positioning Satellite latitude and longitude data to be stored within this metadata which may provide clues or evidence as to your identity or that of your confidential source.

The mobile phone is as vital tool in state surveillance.

Do not use your normal mobile phone to contact a journalist or blogger. All phone calls are recorded in the UK. The police will have access to your number, the number of the person you are calling, your location and the duration of the call. In some cases the content will also be recorded.

Buy a cheap pre-paid mobile phone from a supermarket or some other anonymous source.

Do not buy the phone or top up phone credit using a credit card or  make use of a supermarket loyalty card [if you have any sense you will not have a loyalty card].

Do not switch on or activate the new mobile at home or at work, or when your normal mobile phone is turned on (the first activation of a mobile phone has its physical location logged, and it is easy to see what other phones are active in the surrounding cells at the same time.

Do not register your pre-paid mobile phone, despite the tempting offers of "free" phone credit.

Do not store any friends or family or other business phone numbers on this disposable phone - only press or broadcast media or blogger contacts.

Set a security  code on the phone. Even when turned off your phone will regularly ping nearby cell towers, providing a record of where you have been.

Physically destroy the phone and the SIM card once you have done your whistle blowing. Remember that your DNA and fingerprints will be on this mobile phone handset.

Do not call from a public call box.

On the 20th November 2006 the UK's Mirror newspaper reported that -

BT plans to put thousands of spy camera recorders in its phone boxes and beam suspects mugshots to police.

Cameras stationed on top of lampposts near the kiosks will send images to hidden digital video recorders inside the booths.

Suspects photos will then be messaged almost instantly to hand-held digital assistants used by police and emergency services.

The scheme is already being tried out in Tower Hill, East London, and is due to start in the Midlands soon before going nationwide.

Redcare Vision, BT's engineering arm, said: "The current climate of unease with regards to the safety of our streets has led to a need to expand the CCTV network across the country."

What is clear  is the extent of the UK’s surveillance state. It is also clear that the state has all the laws and apparatus it needs to prevent inconvenient stories reaching the media.

Do you want to bet that they are not using those powers? Ostensibly the surveillance apparatus has been created to protect us from terrorist. In reality, it has been created to help the government suppress dissent and prevent embarrassing exposure of their activities.

The media has been really stupid not to alert people to the risks of surveillance. Just wait for them to start to whine when they notice that their confidential sources are drying up.