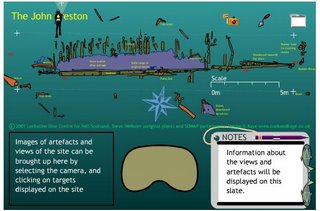 I was reading this article in Wikipedia about the Welsh slate industry and came upon the following line.

Slate has been mined in north Wales for several centuries — this was recently confirmed by the discovery of the wreck of a wooden ship carrying finished slates in the Menai Strait which dates from the 16th century.

It reminded me of the time I dived a slate wreck in the Sound of Mull, off the west coast of Scotland. The wooden hull of the boat had rotted away, leaving behind its cargo of roof slates. These were neatly stacked up on the seabed. They looked rather strange amongst the rocks and seaweed. I was told by the dive boat skipper that the boat had been transporting a family from one part of Scotland to another, and they had been carrying their roof slates with them as being too valuable to leave behind.

When I read the Wikipedia article I did a search for slate wreck and Mull, and found this article. Apparently the boat was called the John Preston, and had been carrying a cargo of slates from Wales to Scotland. The boat had gone down in a storm, but the crew of six had managed to scramble ashore.

There are a lot of wrecks around Great Britain. Two world wars, submarine warfare and a lot of bad weather have seen to that. I remember diving a site off the Scilly Isles.A gully  contained three wrecks stacked one on top of the other. They gone down at different times, but the locals had only known about the first and the third. The middle one had gone down in a storm and all the crew had been lost. Nobody had known about the lost ship until divers chanced upon the wreck gully.

One reason there are a lot of wrecks off the Scilly Isles is because the locals used to support themselves by luring ships onto the rocks and then ransacking them.