The Hadrian's Wall Path is a 84 miles long footpath that runs across the north of England, along the line of Hadrian's Wall. It goes from the Roman fort of Segedunum on the North Sea to Bowness-on-Solway on the Irish Sea. Every so often I have been driving to Northumberland and doing a section of the walk. The last section was from Harrow Hill to the Roman fort at Chesters. This 12 mile section was not one of the most interesting parts of the walk. You can see that from the photographs.

The path runs through the cities of Newcastle and Carlisle, and across wild moorland. The middle third of the walk is the best. The countryside there is the most spectacular, and more of the wall is visible. This NG photograph captures it very well. England is to the left and Scotland is to the right.  When you look out towards Scotland it is bleak moorland all the way to the horizon. 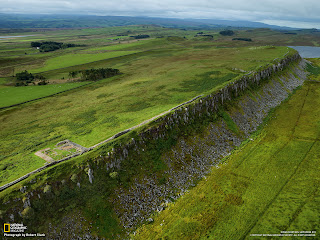 John Clayton was a 19th century Newcastle lawyer who became worried that the wall was being destroyed by people taking the dressed stone to build farmhouses and other buildings. He started buying up the land on which the wall stood, and later he began employing people to reconstruct parts of the wall. Without him the wall would have almost disappeared.  The legionnaire in the painting below has been given John Clayton's face. 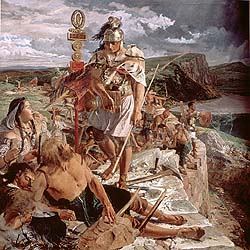 Though much of the wall has disappeared the stone that the Romans used to build it is still around in nearby buildings. Lanercost Priory was built in the 12th century with stones from Hadrian’s Wall and many buildings along the route contain stones from the wall. 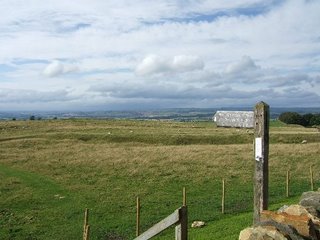 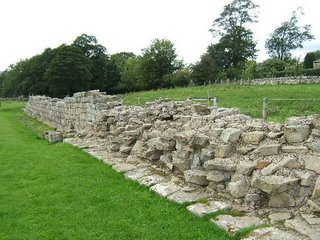 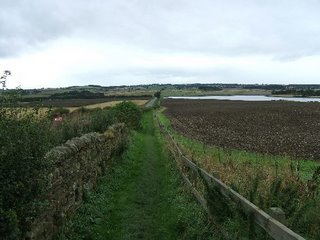 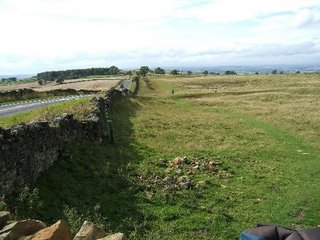 Though the wall passes through some pretty bleak areas it is not a difficult walk. A special walkers bus runs along the route of the wall during the summer months so it is easy to get back to your car at the end of a days walking. There is also a rail service from Carlisle to Newcastle that runs close to the wall for part of its length.