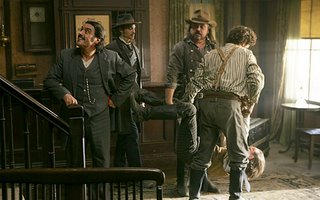 The NYT reports that HBO are killing off the Deadwood TV series. Whilst the title of the article is upbeat what is actually happening is that, after the third series is completed, they will film two, two hour episodes, and then Deadwood is finished.

This is bad news for all those people who think that Deadwood is one of the best things that HBO has ever done. I would consider it at least as good as HBO’s other great series, the Sopranos. The stories are strong and the cast is excellent. Also, the sex and violence is explicit, and the language unrestrained. In the first episode I watched three people were murdered and fed to pigs. The British actor, Ian McShane, gives an incredible performance as the bar owner and local crime boss Al Swearengen.

I love it and recommend it to all my readers.

I think it has only been shown on Sky in the UK, but the first two series are available on DVD. The boxed sets are about £36 each so renting might be a good idea. I rented mine from Amazon. Deadwood may never be shown on UK terrestrial TV because of the strong language. They would have to beep out half the dialogue.

Most American TV [and most British TV] appears to be garbage. The few series that are not are soon killed off by management morons. Firefly was killed off after one series, and now Deadwood is to go. It must be very discouraging to actors. They put on strong performances, and have superb scripts, and they still get fired.

BTW – If you have never seen Firefly, I recommend the DVD boxed set. You might also like to check out the DVD of the film Serenity, which was based on Firefly.