Scotland coast to coast by the Union and Forth & Clyde canals

Recently I did the last stage when I cycled from Auchinstarry Basin to Bowling where the canal enters the Forth of Clyde. The last time I was at Bowling it was derelict. Now it is full of yachts and canal boats. 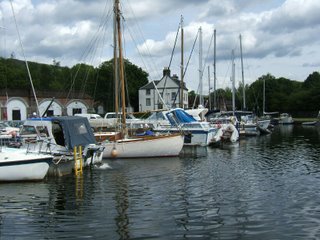 The cycling was very enjoyable, even if I was a little saddle sore at the end. It was all off road of course, and mainly flat.

The Union Canal is a contour canal and does not have any locks. The Forth and Clyde is very different. There are three series of multiple locks going through Glasgow. Taking a boat through these would be a long and tiring business. That is perhaps why I passed several boats on the Union, but none on the F & C. 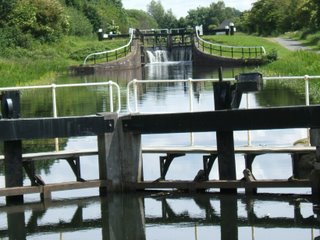 There is a Wikipedia article on the canal cycle path. This has a link to an annotated map of the path. The map was created using Windows Live Local mapping service. This is a better mapping service than Google’s.

One curious thing I noticed near Stockingfield Junction in Glasgow was this surveillance camera. I know the UK has more surveillance cameras than any other country, but surely we have not gone so far as to need to put spy cameras on canals. Perhaps it is there to detect boatloads of Al-Qaeda terrorists moving up the canal. I did not see any customs presence at Bowling, so I suppose there would be nothing to prevent someone sailing a small yacht into Bowling Basin, and then up the canal to Glasgow or Edinburgh. 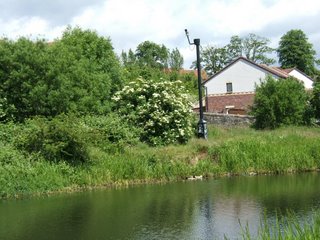 I also spotted this fish and ship restaurant in the shape of a boat next to the canal at Clydebank. It looks pretty classy. I wonder what the wine list is like. 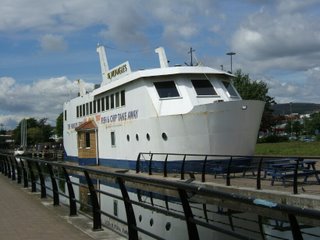