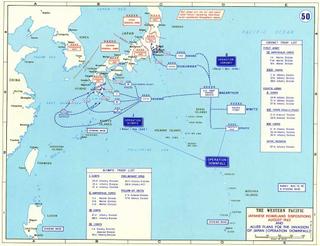 Since 1938 the has been creating campaign maps to use on their courses. They have now placed these in the public domain. The one shown is the plan for the invasion of . this would have been put into effect if the atomic bomb had not forced 's surrender. It looks as if the main part of the attack would have been directly into Tokyo Bay.