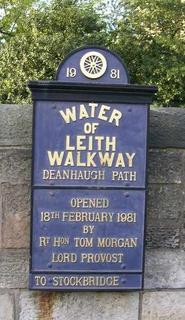 The walkway starts next to [ Balerno is a village on the south-west outskirts of and runs 12.25 miles [19.6 kilometres] through Edinburgh to . The path runs downhill, but the incline is so slight that it is barely perceptible.
Approximately half a mile of the route is on roads, for the remainder the path alongside the Water of Leith, and away from traffic. The path surface is a mixture of tarmac, compressed grit and compressed earth. The surface is uniformly good with very few muddy patches or potholes. The route is well used by both pedestrians and cyclists.
The path is fairly well signposted, but there are one or two places in where the path breaks and it is necessary to hunt around for its continuation. The odd signpost has been vandalised, so that sign point in the wrong direction. The path breaks where it crosses under the and the signposting here is confusing. After crossing a footbridge over the duel carriageway there are two ways of continuing.
The path passes through the attractive area of and ends in the docks at . The docks were once a dismal place but are being gentrified and there are a lot of new restaurants and bars.
Walkers can return to Balerno by catching a bus to the centre of from the Ocean terminal, and then the 44 bus to Balerno. For cyclists the easiest way to return to Balerno is to cycle back.

I love Edinborough. Glasgow, too!