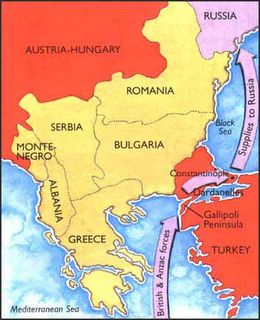 One of my great uncles fought at Gallipoli.  He took part in the  ill fated World War I scheme to break through the through the Dardanelles, capture Constantinople and supply Russia via the Black Sea. At the time Russia was allied with the French and British against the Central Powers [the German and Austro-Hungarian empires]. The Dardanelles were controlled by the Turks, who were allied with the Central Powers.

Contrary to popular belief all the fighting was not done by Australian and New Zealand troops. The British Army suffered 205,000 casualties and the French 47,000; compared with the total of 33,600 losses by the ANZAC forces.


He survived Gallipoli and was then sent to Flanders in Belgium, where was killed in 1917, at the age of twenty two. I had not known where he was buried, but a few years ago I wrote to the Commonwealth War Graves Commission and they told me he was buried in Brandhoek Military Cemetery. The next year, returning to the UK after a holiday, I detoured to visit the cemetery and found the grave. Brandhoek was the site of a casualty station so I suppose my uncle was wounded and taken to the station, where he died. There had been a number of big battles in Flanders but I think these had ended in 1916 and my uncle was probably killed by some routine shelling. That’s what killed most World War I soldiers. He was in the East Yorkshire Regiment so if I can find the location of their regimental diaries for 1917 I may be able to discover the circumstances of his death.

My uncle’s grave was next to that of the only man to ever be awarded two Victoria Crosses, but, of course, neither he nor my uncle was actually buried there. The neat graves with their white headstones were laid out for the benefit of relatives visiting after the war. In reality a pit would be dug behind a casualty clearing station and the dead chucked in with some quicklime.

Unlike the man with two VCs my uncle was just an ordinary working class lad. When I was young I had about twenty pages of poetry that he had written, mostly about his time at Gallipoli. I don’t remember much of it now except that it was written out in a very neat hand. I was too young to know to look after it properly and it was lost after the death of an elderly relative. I suppose it was just thrown out. The last member of the family to have known him personally died some years ago.

The third battle of Ypres (also known as Passchendaele) began on 31st July 1917 - so it's possible that your relative was killed in the fighting rather than routine shelling. There were 3 casualty clearing stations at Brandhoek up until mid August 1917 - the 32nd CCS, the 44th CCS and the 3rd Australian CCS - which formed the Brandhoek Field Hospital - they specialised in abdominal and chest wounds. The unit war diaries for the 32nd and 44th are in the National Archives at Kew and it's possible that there might be some reference to your relative in those.
The New Military Cemetry at Brandhoek was opened in late August 1917 (while the battle was still going on) and some of the sodiers really were buried there rather than being thrown in a pit outside the back of the CCS.