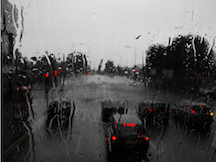 Your word for today is Dreich  [dreek]. This word is used to describe Scottish weather which is dull, grey and depressing. There is a lot of this kind of weather in Scotland. Usually rain is involved, but not honest, Christian rain, which looks as if it might end in a few hours, but continuous drizzle that looks as if it could last for days, and usually does.

I first moved to Pollack Mansions on a New Years Day many years ago and it was 17 degrees Fahrenheit below zero, with icicles six feet long on the river below and seven burst water pipes. Thanks to global warming I thought that winters like that had gone.  We used to go sledging in the village square but snow seemed to be a thing of the past. Instead we have had lots of dreich winters.