Death in the Long Grass 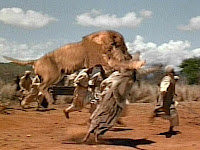 You may have seen the 1996 film The Ghost and the Darkness with Michael Douglas and Val Kilmer. The  film was based on Lieut.-Col. J. H. Patterson’s book 'The Man-Eaters of Tsavo'. The man-eaters were two lions who killed 135 construction workers on the Uganda Railway in 1898 before they were shot by Patterson. The film is a typical Hollywood product but the book is worth reading. It is now out of copyright but  I found a copy on the internet. Patterson goes about slaughtering the wildlife, as they did then, but the wildlife has several very good attempts at slaughtering Patterson.

Reading it reminded me of Peter Hathaway Capstick’s 'Death in the Long Grass'. This 1977 book is about Capstick’s life as a big game hunter in Africa. It is an excellent read. The book is still in print and can be obtained from Amazon. I managed to obtain my copy from a charity shop for 70p.

Capstick describes several encounters with lions and mentions that packs of man-eating lions were common, especially near the Great Rift in Central Africa. The Ubena man-eaters had been operating for ten years before they were all killed. A game office called Rushby  wiped out the Njombe man-eaters, a pride of fifteen lions, which were thought to have killed 1500 natives and colonists. Rushby described the hunt in 'No More the Tusker'. Unfortunately the book is now out of print.

A paper [The Science of ‘Man-Eating*’ Among Lions Panthera leo With a Reconstruction of the Natural History of the ‘Man-Eaters of Tsavo’]
by Julian C. Kerbis Peterhans and Thomas Patrick Gnoske refers to Rushby and the Njombe pack. 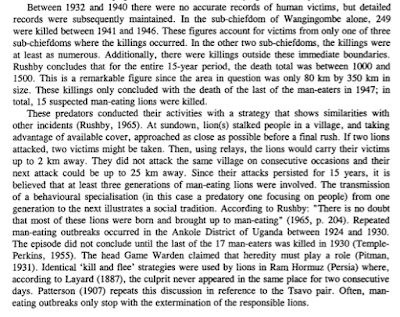 A fully grown lion is 6-8 ft long [head and body] and about 4 ft tall.  The natives would have stood little chance against such creatures.  Video.

Capstick has some wonderful anecdotes about lions and other African predators. Its clear from what he writes just how deadly these cute Wildlife Special creatures are in their own environment. He thought that crocodiles alone were killing ten Africans a day at the time he wrote, usually women who had gone down to a river bank to collect water. Also, how little chance anybody would stand against them unless armed with a powerful rifle. Capstick was experienced and well armed but he acquired 300 stitches, three severed tendons and a cut femoral artery during his career.

"Zambia’s lions had a far worse reputation during the bygone colonial era than did the Tsavo lions. In the far north on Lake Mweru, there was an old boma (government outpost) called Chiengi, about 160kms from Mporokoso, and it was in this area that some man-eaters periodically set up a reign of terror, and they were never beaten. One particular lion, which regularly killed natives in the vicinity of Chiengi Boma, became known as Chiengi Chali. During 1909 alone, he killed ninety locals. For a long time, attempts to bring him to book failed, on one occasion he actually leapt into the courtyard of Sealy the District Officer’s house, but escaped before Sealy could get in a shot.

Efforts to bring Chiengi Chali’s reign of terror to an end were stepped up, with fires being lit and guards posted, but it was to no avail, he just went on killing. Chiengi Chali was not intimidated by very much and broke through the thatched roofs of village huts or forced his way into already lit up doorways. For a long time, he managed to avoid trap guns, yet stole the bait attached to them."


Jim Corbett wrote a series of books about hunting man-eating tigers [Man-Eaters of Kumaon] and leopards [The Man-Eating Leopard of Rudraprayag] in India. One tiger had killed over 400 people. A woman was taken from her hut by a tiger.  The tiger entered via a small window, took the woman from amongst her family as they slept on the floor, and left with her body through the same small window. A flower pot in the window was still in place when the family woke the next morning.

I enjoyed the film, though I figured that Hollyweird had bolloxed up the truth. Capstick and I have something in common, we both survived the femoral artery severing. Enjoyed the post!