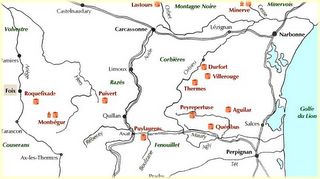 The Cathar Castles are a chain of a dozen or more fortresses that run across southern France, west of Perpignan and just north of the Spanish border.

The Cathars were a religious sect whose teachings were significantly at odds with the teaching of the Catholic Church. The sect had many admirable features and thrived in Languedoc with the support of the local nobility. They treated women as equals and many women played prominent parts in the history of the Cathars.

The Roman Catholic Church didn't only organise crusades to the Holy Land. There were many crusades within Europe. For example, the crusades by the Teutonic Order to convert pagans around the Baltic Sea and the Hussite Crusade in Bohemia.  Pope Innocent III was determined to suppress the Cathars and in 1209 the Church started the Albigensian Crusade to destroy the heretics and their supporters.

As Wikipedia notes, “This implacable war threw the whole of the nobility of the north of France against that of the south, possibly instigated by a papal decree stating that all land owned by Cathars could be confiscated at will. This was practically an open invitation to wholesale theft with the blessings of the Church as the area was full of Cathar sympathisers. It is thus hardly surprising that the barons of the north flocked south to do battle for the Church.

In one famous incident in 1209, most of Béziers was slaughtered by the Catholic forces headed by the Papal Legate. The Abbot of Citeaux was asked how to distinguish between the Catholic and Cathars, and he answered "kill them all, God will know his own."

The crusade was followed by the Inquisition, and by the beginning of the 14th century the Cathars had been destroyed. There are several good books