In June 1629 the ship struck a reef off the coast of Australia.  Forty people drowned but 301 made it ashore. A Jeronimus Cornelisz led a mutiny that soon led to mass murder. His followers murdered  men, women, and children. Eventually a rescue ship arrived but only 68 out of the 341 crew and passengers survived to reach the port of Batavia in the Dutch East Indies.

It is a famous shipwreck. I read about it in 'Batavia's Graveyard: The True Story Of The Mad Heretic Who Led History's Bloodiest Mutiny' by Mike Dash, but there are several other books on the subject.

I recently visited  a shipyard in Holland which has built a full scale replica of the Batavia.

The replica was built at the Bataviawerf (Batavia Wharf) in Lelystad. The work lasted from 1985 to 1995, and was conducted as an employment project for young people under master-shipbuilder Willem Vos.

The site is open to the public and visitors can go around the shipyard and aboard the Batavia. It is well worth visiting.

The Batavia is moored across the road from the shipyard. You can go around the yard and ship either as part of a party [but the tour is in Dutch] or on your own.

The shipyard is also building a replica of  another 17th century ship, the Zeven Provinciën, a warship. Work on this started in 1995 but had to be completely scrapped due to technical problems. In 2008 work started again. The photograph below shows what has been completed. Gantries have been installed and visitors can go around the skeleton. Nobody was working on the ship when I was there.


The Zeven Provinciën photographed from the Batavia. 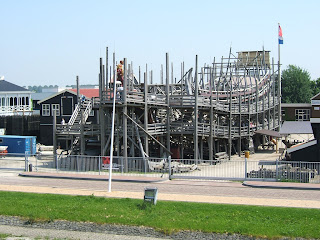 In addition to constructing the Zeven Provinciën the yard also appears to be building a smaller boat. Perhaps this is being built as a training exercise. 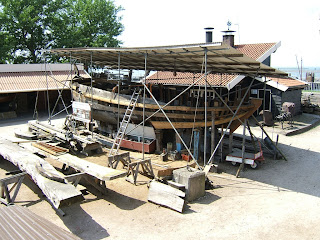 The Batavia's builders have added one feature not in the original ship. In the photograph below you can see a carving of a figure climbing into the ship via a porthole. 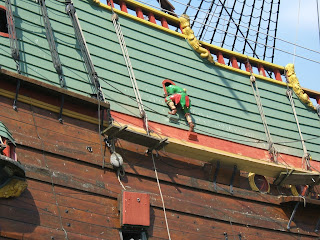 Here is the figure from the inside of the ship. 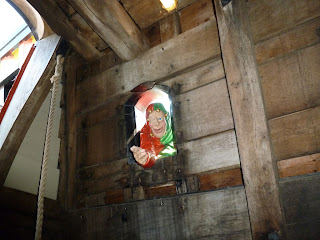 The Batavia has many beautiful carvings. 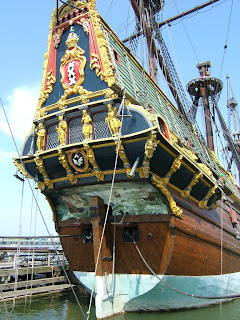 The carvers at work. 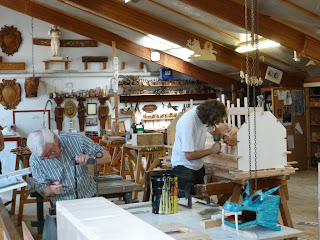 When going around the shipyard I was told that if a door was open visitors could go inside. There were few closed doors and I was able to go around the sail loft, the blacksmiths shop and many of the other workshops.

Two of the ships pumps. 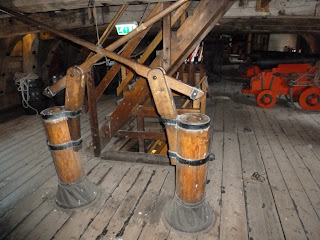 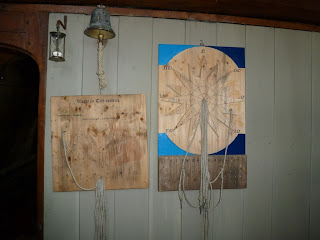 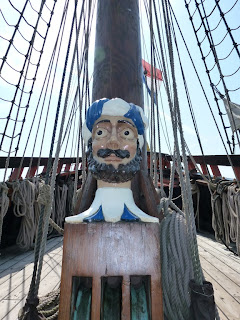 As far as I could see the Batavia has been constructed to a very high standard. The workmanship was impressive. So impressive that I wondered how much of the work could have been done by unskilled youths. There were some youths around when I was there but they were only doing menial tasks such as painting or sweeping. All the skilled work was being done by older men.

The Dutch and English fought several naval battles in the 17th century. Usually the Dutch won. The Royal Navy's most complete and humiliating defeat came when the Dutch raided the naval base at Chatham and burnt or towed away several English warships. See the Battle of the Medway.

The Dutch were able to build warships and trading ships such as the Batavia quicker and cheaper than the English because they used a superior technology, the wind powered sawmill.

Instead of sawing planks manually the Dutch built over 200 wind powered sawmills and used them to produce sawn planks and posts for their shipyards. Wind powered sawmills produced major productivity increases ["With hand sawing, 60 beams or trunks would take 120 working days, with wind power this only took 4 to 5 days"].

Two wind powered sawmills can be seen at the Zaanse Schans open-air museum in Holland, not far from the Batavia shipyard.