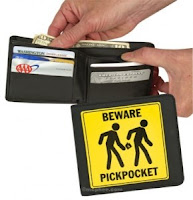 The train had paused for while at Sol, one of the busiest stations on Madrid's metro system. I had my back to the door, but I was conscious of some young women entering the carriage behind me. I felt them push against me and then they left the carriage and moved to the one in front.

My companion told me that one of the girls had tried to steal her purse. I checked my wallet and it had gone from my trouser pocket. The train was still stationary so I went to the carriage in front. There were five girls, all dressed very similarly. I knew it was them that had stolen my wallet and I grabbed hold of the nearest. As I argued with them I recalled that I had seen two older women, dressed in the same kind of black padded jackets, leaving my carriage and moving off down a tunnel.

The argument was going nowhere. I couldn't identify which of the five girls had stolen my wallet, and I suspected that the wallet had gone with the two older women. The girls obviously knew that I had nothing on them. They were so smug that I felt like punching them, but I had no evidence of their guilt and it could have finished with me being charged with assault and them walking free. Also, I had no desire to get a knife in my stomach.

We reported the theft to the station guards and eventually a policeman arrived and took us to transport police HQ at at the Nuevos Ministerios station. They showed us lots of photographs but we couldn't identify anybody. They all looked the same, deliberately of course. The policeman told us that the seven woman were probably part of a Serbian pickpocketing gang. They had lots of photographs of such gang members. We got a form showing that we had reported the theft and that was that.

My passport, driving license, credit cards and money had been in the wallet. I telephoned my bank and reported the theft of the credit cards. There had no been any attempt to use the cards.  I suppose the two older women  stripped the money from my wallet and then discarded it. Perhaps they also threw away my passport, driving license and credit cards. I would have thought that these had considerable value, but maybe they got rid of them in case they were stopped and searched.

The driving license didn't matter because I didn't need to hire a car, but the passport was an immediate problem. Fortunately, our hotel was close to the center of Madrid and the British consulate. I went there next day to get a temporary passport. The people there were charming and efficient. They issued me with a letter that would let me get back through UK immigration.

The consulate charge me €63 for the letter and it cost me another £200-300 back in the UK to replace my passport and driving license. I didn't have any travel insurance to cover this or the money I had lost with the wallet.

We had several more days in Madrid and as we travelled around the metro system we noticed several of these female pickpocketing gangs. They're easy to spot. They all dress the same and they have different features to the people who live in Madrid. They seem to have a free run of Madrid's metro system.

I have a few observations on the experience.

I am normally very security conscious, but you only need to relax once. I should have been more careful. I should also have had travel insurance. I had not bothered because UK citizens get free medical treatment in other EU countries. That was a mistake.

The Madrid transport police don't seem to be very effective. We spent about an hour in the police station and it was very noticeable how many police were just hanging around the place instead of being out in the metro system trying to catch the pickpockets. These gangs were so easy to spot that any effective police force should have had no trouble at all in clearing them out. I think Madrid needs to sort out the management of their transport police.

It's important to be prepared. Having all the information you need in an emergency makes it a much less unpleasant experience.  I always carry a notebook containing telephone numbers, passport numbers and any other information that I might need a an emergency. I had also obtained the address and telephone numbers of the British consulate before leaving the UK.

The UK tabloid press likes to knock the UK Foreign Office, but I have had two experiences of the diplomatic service in the past year and they have both been good.

See my earlier posts on my Madrid trip

A few nights in Madrid

Trips out of Madrid

OMG! That's quite a story!! I learned years ago to carry my wallet in front pocket... Looks like hell, but I know it's there...