In 1850 James 'Paraffin' Young found a way of extracting oil from coal and shale. This started Scotland's oil industry.  In 1851 Young and his partners built the world's first profitable commercial oil works. That was eight years before Edwin Drake's well near Titusville, Pennsylvania and the start of the US oil industry.

In the years that followed shale mines and oil refineries sprang up all over central Scotland.  The map below shows all the crude oil works which were built during this period. 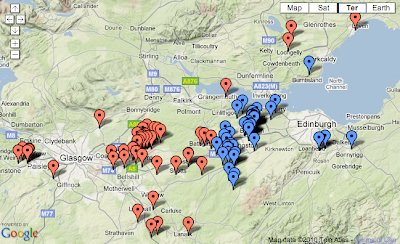 Thousands of men were employed in the industry, either in digging up the shale for refining, or in the oil refineries. Many villages had to be built in remote locations. The map below shows some of the shale oil villages. The pink markers show the villages that still exist. The blue markers show 'ghost' villages which have been completely demolished. 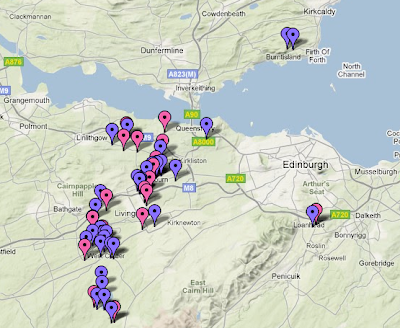 The industry started to fail in the 1930s, after the development of the oil industry in the USA and other places. It was supported by the UK government during WW2, but collapsed soon after the war ended.

The most visible evidence of the industry that remains are the shale bings. These are the hills of the red shale that remained after the oil had been extracted. This is one near the shale village of Tarbrax.

The most impressive bings are the Five Sisters in West Lothian. Apparently, there is now a sport of 'bing bashing' as people started climbing these bings for fun.