If Americans worry about their 1% they might want to read this from Walter Scheidel,  Professor of Classics and History, Stanford University.

"Well, the most famous or infamous example is that in England right before World War I the richest 1% of the population owned 70% of private wealth, and the richest 10% owned 92% of all private wealth, which means there wasn't really much left for the other 90% of people in Britain to own. That's a particularly extreme example but you have similar levels in France, in other countries, especially, in Europe …" 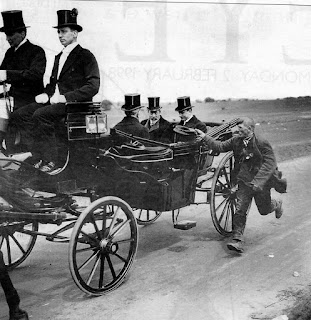 The quote comes from a podcast on Economic Inequality produced by ABC (Australian Broadcasting Corporation) Radio National's Rear Vision programme. You can find the full podcast (audio and transcript) here.

"In today's information age we know when things happen almost immediately but so often we don't know or understand why. News and current affairs are instantaneous but more often than not presented in a historical vacuum. Rear Vision attempts to change this by presenting contemporary events and people in their historical context."

Some people see the period before the First World War as some kind of European Golden Age. I suppose it was for a very small number of people.

If the 70% and 92% figures are correct Britain appears to have been a kleptocracy. A country where corrupt political systems and control of what Gramsci referred to as the state's ideological and coercive agents [schools, media, courts, police, army]  allowed one social class to rob the rest of society. All those beautiful English stately homes and Scottish castles are the proceeds of crime.