The Brexiters plot to oust May as UK Prime Minister

The people behind the Brexit campaign want to get rid of Theresa May as Prime Minister and replace her with Boris Johnson [or someone similarly pro Brexit]. They are conducting a covert campaign to achieve that objective. The first step is to force May to resign and thus trigger an election for a new Conservative Party leader [and new Prime Minister]. They are using anything they can, however absurd, to apply pressure.

For example, May had a coughing fit during her speech at the recent Conservative Party Conference. That, some are apparently arguing, is yet another sign that she must be sacked. Coughing during a speech, their media hirelings argue, is clear evidence  that she is totally incompetent. 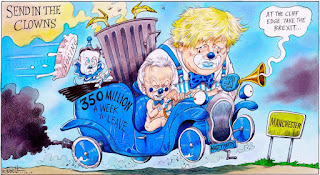 Once they force May's resignation the key to their success is the process by which the Conservative Party elects a new leader.

Step 1 - Conservative Members of Parliament select two candidates. Boris Johnson would be almost certain to be one of the candidates, even though most Conservative MPs despise him. He would get enough votes to get on the short list. It would not matter who the other candidate was.

Step 2 - Conservative Party members in the constituencies would vote on the two short list candidates. Since most party members are older, more right wing and more pro Brexit than their MPs, or the general population, there would be a good chance that Boris would be elected party leader.

Step 3 - The Conservative Party has the most votes in Parliament so whoever is elected as the new party leader would become the new Prime Minister. There would be no need for a General Election. The lucky winner would then have five years remaining of the current parliament before a general election would have to be held.

Plenty of time to arrange the right kind of Brexit. One that would get  rid of those tiresome EU regulations on workers rights, environmental standards, product quality and competitive bidding. A chance to get back to the kind of Britain we used to have fifty years ago. Where everything was organised by and run for the benefit of the right chaps and the proles had been taught their place. Lets call it Boris World.

Being able to organise whatever Brexit you want is the prize and getting rid of May is the way to win the prize.  No wonder somebody is running a smear campaign.  I have no love for Theresa but the alternatives are much worse.

If you think the way by which someone can become Prime Minister without having to win a General Election is a little strange you may remember that Teresa May became Prime Minster through this process. The previous Prime Minister resigned. May stood as leader, and since there were no other candidates, she became the new party leader and Prime Minister. The party members in the constituencies never had the chance to vote. Nor did the UK electorate.