Having purveyed fake news for decades the British press is getting frightfully annoyed about fake news on the internet. Nobody hates a liar more than a than a lying hypocrite.

How dare these internet scallywags lie to the public. That's the prerogative of the government and the media. How else can our rulers maintain the false consciousness that is so essential to the maintenance of a well policed state.

One of the reasons that some people voted to leave the EU was that some British newspapers had been printing lies and distortions about the EU ever since we joined. The sustained drip, drip of poison finally had its designed effect.Of course, Brexit will be  bad for most people, but some chaps expect to do very well out of it once they are free of all that annoying EU regulation.

The Economist has a nice piece from Cory Doctorow identifying the most prolific purveyors of fake news about the EU.

EU lies and the British tabloids who told them

Private Eye has a cartoon which neatly skewers the hypocrisy of the Daily Mail [and the stupidity of its readers]. 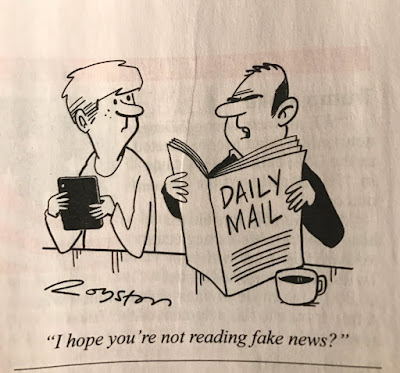