Another reason to sell Apple 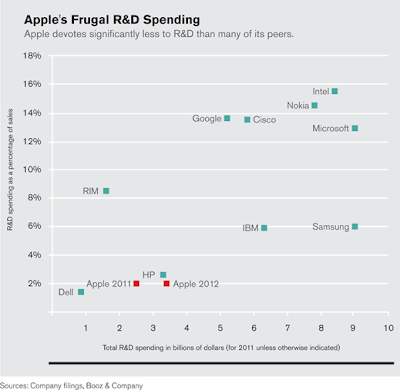 From the MIT Technology Review.

"Few large technology companies are more stingy with their R & D spending than Apple. Focused on developing and improving a handful of products, Apple lacks the sprawling basic research divisions that, for example, recently led IBM scientists to a breakthrough that could further shrink the size and cost of computer chips. While Apple's total $3.4 billion R&D budget in 2012 is indeed growing, it's still only a sliver of the company's vast cash reserves. Viewed as a percentage of Apple's sales revenues, its R&D spending remains steady over the last few years at 2 to 3 percent. These percentages put its spending far below its peers, including Microsoft, Google, and Samsung.

Tablets are becoming  commodity products and Apple can no longer expect to enjoy the high margins it has had in the past. Its share of the tablet market has already fallen below 50%. Now that the tablet market is so competitive we can expect prices and margins to continue to fall.

Apple needs innovative new products, but where are they to come from? In the past the company has relied on good design but the latest tablets from Google and Microsoft show that they can do good design as well.

Apples shares are already well below their peak. I expect them to fall much farther.

Email ThisBlogThis!Share to TwitterShare to FacebookShare to Pinterest
Labels: apple