This is my latest post on English moated manor houses. You can see my other posts by clicking on the houses tag on the right. 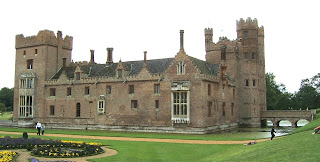 Oxburgh Hall is in Norfolk, to the east of Downham Market. It was built by the Bedingfields in about 1482, during the Wars of the Roses. Most of the manor houses I have written about were built by Norman families who came to England after the defeat of the Saxon aristocracy in 1066. Oxburgh Hall is no exception. The Bedingfields were descended from Ogenus de Pugis, a Norman knight who fought at Senlac Hill [Battle of Hastings] at the side of Duke William [aka William the Conqueror].

Just as an aside, England has fought many battles which have been described as decisive but Senlac Hill was the most decisive battle in our island's history. The Norman victory led to the destruction of the Saxon aristocracy and established a Norman/French aristocracy which ruled England for many centuries [and which still owns much of the land in England].

The house remained in the Bedingfield's hands  until the 1950s, when it passed to the National Trust. It is now open to the public; though members of the Bedingfield family still have rooms in the house.


The large gateway tower makes the house look as if it is fortified, but that is misleading. The house was built as an home, not a castle. 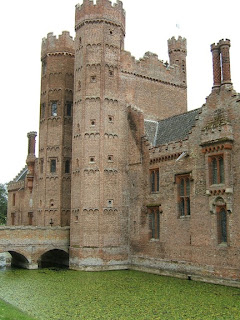 You can go around the house but there is not a lot to see. A lot of rooms [marked in grey in the picture below] are closed to the public. The gardens are worth seeing and the National Trust run informative guided tours. 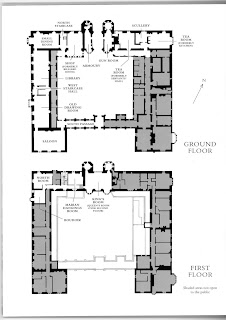 The Bedingfields were Roman Catholics and subject to persecution after Elizabeth I became queen [Elizabeth was held as a prisoner at Oxburgh Hall during the reign of her sister Mary]. They had to worship in secret. The Hall has a priests hole for hiding priests and other Catholics who were being sought by the authorities.  It is not the room in the photograph below but accessed via a privy at the back of the room. It does not appear that being a priest was much fun during Elizabeth's reign. It was a serious business. If the Queen's agents found a priest in your house it could mean forfeiture of your estate, and perhaps of your life. The priest could expect torture and execution. 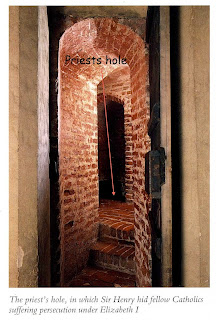 Several of the manor houses I have written about have priests holes. Ightham Mote and Baddesley Clinton have one or two. Harvington Hall has several really ingenious hiding places.