The Anderton Boat Lift was built in 1875 to allow canal boats to move between the Trent and Mersey Canal and the River Weaver. The Weaver connects to the Mersey, then the Port of Liverpool and then the world.

It was a big success. It was used to export salt from the  Cheshire "salt towns".  It was also used to import clay to the Potteries and export crockery.  In 1913 213,000 tons moved through the Lift.

The boat lift closed in 1983. It has now been restored to full working order and is a local tourist attraction. 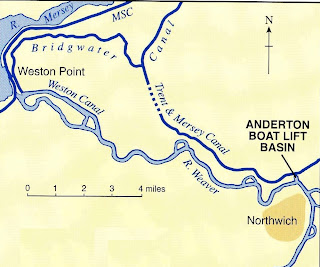 A boat lift is a simple contraption. There are two metal tubs [aka caissons], each large enough to hold a canal boat, which can be raised or lowered. One is held level with the upper waterway and the other with the lower. Both tubs are filled with water. 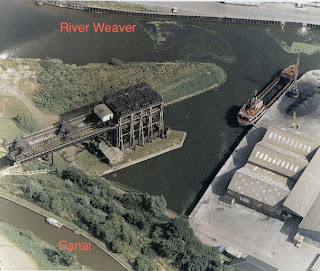 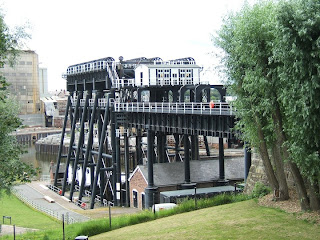 Boat lifts are faster and use less water than canal locks, but they are rare.   I think there are only two boat lifts in the UK. The other is the newly built Falkirk Wheel.  The Belgians have recently built a huge one at Strépy-Thieu. The Chinese are building several. 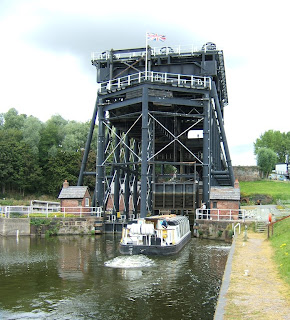 There is a new visitors centre next to the Lift,  It has a very well equipped shop and bookshop. Visitors can pay to ride a canal boat through the Lift but it looked expensive, slow and not all that much fun [unless you are desperate for amusement].

Edwin Clarke, the engineer who built the lift, went on to build the four lifts on the Canal du Centre. They are now a UNESCO World Heritage site. You can read my post about those lifts here.

I’m writing an article about the Anderton boatlift for the the magazine the supporters of our Steam Engine museum receive. I’m one of the museum’s volunteers.

There is a problem with the displacement when there’s a boat in a caisson.

I’ve read on the internet (including Wikipedia) that a full caisson with or without boat weighs 252 tonnes. (or 256 metric).
By dimensions of length 23 m, width 4,7 m and 2,9 m deep, I come after a little calculation of a volume of 313 cubic meters (which is 313 metric ton of water alone). So I conclude the caissons are not filled to the rim.

And so my question is: is there some kind of overflow in the caissons? (otherwise the displacement story does not come true)