The Fraser River is the longest river in British Columbia [854 miles] and flows into the sea just south of the city of Vancouver.  Every year tens of millions of salmon used to enter the mouth of the Fraser and several canneries were built at at the small port of Steveston to process the catch. 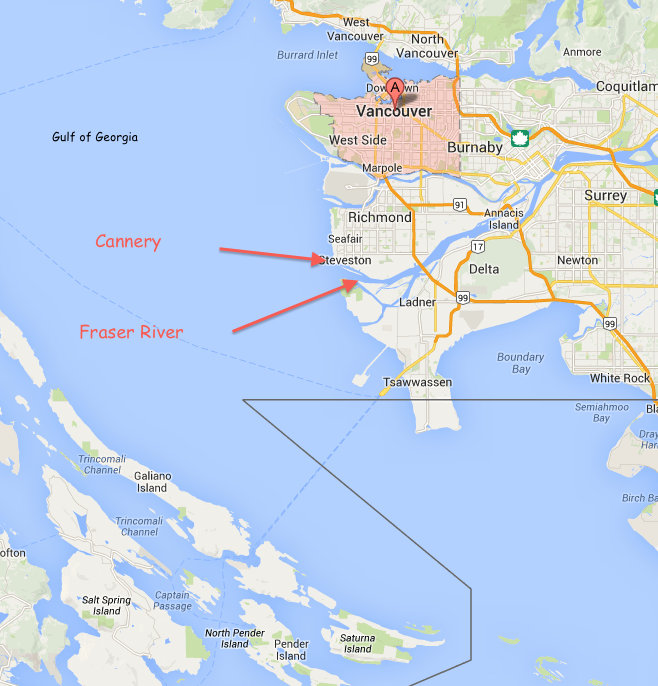 At the turn of the twentieth century, Steveston was the busiest fishing port in the world, with fifteen salmon canneries, six hotels, numerous saloons and gambling dens, and up to fourteen windjammers simultaneously loading canned salmon for world markets. On a Saturday night, 10,000 people thronged the board walks, including Native Indians, Japanese, Chinese, European immigrants, and sailors from the seven seas.
Some of the cannery labour was provided by Chinese workers who had come to Canada to work on the transcontinental railway and were unemployed when the railway was finished. At the  Gulf of Georgia Cannery three gangs of thirty men each worked on topping, tailing and gutting the salmon. Fast work with sharp knives produced a crop of lost fingers.
In 1903, Edmund A. Smith developed a machine that could guts and clean salmon many times faster than human workers. A good worker could remove fins, head, tail and innards from about 2,000 fish per 10 hour day. On the first day the machine cleaned 22,000 fish in nine hours, or about 40 fish per minute. By 1904, the fish-cleaning machines could pack an average of 9,000 to 10,000 cases of salmon per day.

Workers laid the salmon one by one on a moving track. Each salmon had its head cut off by a sharp, rotating blade. A workman then pushed each salmon into the butchering machine. The machine quickly pinned the fish and cut off its tail and fins, and opened the belly with a saw. It even cleaned out the blood and guts with brushes. The butchered salmon was then ejected onto a conveyor belt and sent to the washing tables.

Smiths machine became widely know as the “Iron Chink”, because if could perform the work of approximately 50 Chinese salmon butchers. The innovation increased cannery profits but made thousands unemployed.


Of course, the usual tragedy of the commons situation arose and the salmon were almost wiped out by overfishing. Eventually, all the canneries closed. Only one remains and that is now a museum.

The museum is is a national heritage site and is well worth visiting. Stevenson is easily reached by a subway and bus ride from central Vancouver.

Thanks to conservation efforts salmon are returning to the Fraser in the tens of millions. A local newspaper reported that ' The Pacific Salmon Commission, which had been anticipating a return of about 12 million pinks, now says an estimated 26 million fish are in the Fraser. Other rivers are experiencing remarkable returns as well.

“The fish poured in here in such numbers that the sea was a sparkling diamond,” said Ken Kirkby,  who has been working to restore salmon runs in Nile Creek on Vancouver Island. “You can’t see the bottom of the river for the salmon.”

The increase in salmon numbers may be due to a controversial experiment which  dumped100 tonnes of iron sulphate and 20 tonnes of iron oxide some 350 kilometres off the Haida Gwaii archipelago in an iron fertilization project. This created a 35,000-square-kilometre plankton bloom and it has been argued that Pacific salmon feeding on the plankton would grow in number and size due to the increase in food supply, boosting salmon stocks and causing a massive salmon run in 2014.