Tally sticks and the burning of Parliament 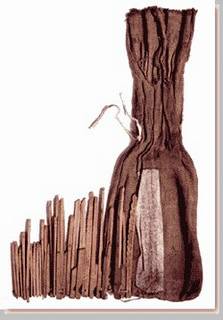 Tally sticks are wooden sticks with notches cut in to them to indicate value ["The manner of cutting is as follows. At the top of the tally a cut is made, the thickness of the palm of the hand, to represent a thousand pounds; then a hundred pounds by a cut the breadth of a thumb; twenty pounds, the breadth of the little finger; a single pound, the width of a swollen barleycorn; a shilling rather narrower than a penny is marked by a single cut without removing any wood.. "]

The British Exchequer kept the national accounts using tally sticks until the late 1780s. In 1834 the Government decided to destroy the stock of tally sticks which had been stored in a basement in the Houses of Parliament.

Unfortunately, the fire got out of control and burned down the House of Commons. You can read about the fire in this Wikipedia article.

"The responsibility for disposing of the tally sticks fell to Richard Whibley, the Clerk of Works at the Palace. He decided against burning them on a bonfire out in the open, as he feared such an action would upset the neighbours. The decision was made to burn the sticks in the underfloor coal furnaces that heated the House of Lords chamber. On the morning of October 16, Whibley assigned the task to two workmen, Joshua Cross and Patrick Furlong. The work went on all day; witnesses recalled seeing the men throw great handfuls of sticks onto the fires, despite the risk of the burning wood overheating the copper-lined brick flues.

It is believed the over-stoked furnaces heated the flues to such an extent that their copper linings collapsed, causing the exposed brickwork to heat up, and igniting the wooden joists that supported the stone floor of the chamber above. This allowed the fire to spread to the vast range of combustible wooden and fabric furnishings inside the Chamber itself.

The fire was the biggest conflagration seen in London since the Great Fire of 1666, and an enormous crowd flocked to Westminster to witness the spectacle. Fire fighters arrived at the scene but were unable to stop the fire spreading around the palace site. The fire was eventually brought under control; but not until the majority of the old Palace had been destroyed."

A 453 year old tally stick has recently been found in Wittenberg, Germany. It is dated 1558 and is 30 cm long with 23 notches.  It is a split tally.  Notches in a tally stick would record the amount of a debt. Then the stick would have been split, with the longer half [called the stock]  taken by the lender and a shorter half given to the borrower. The photograph below shows the lenders part of the stick.