Provins and Mont-Saint-Michel - history by hucksters

Recently I visited Brugge, Bayeux, Mont-Saint-Michel and Provins. All four attract a lot of tourists. Three are UNESCO World Heritage sites (the exception is Bayeux).

Both Brugge and Bayeux do a good job of managing their tourist trade. They have not allowed themselves to be overwhelmed. They have not become consumed by hucksterism [Huckster -  a mercenary person eager to make a profit out of anything].

There are a few shops and restaurants which cater mainly to tourists, but their historical authenticity and architecture  have been well preserved. They are excellent places to visit.

Both Mont-Saint-Michel and Provins are examples of what happens when an historical site falls into the hands of the greedy petite bourgeoisie.

Mont-Saint-Michel looks fine from a distance, and that is how it should be viewed. From about a kilometre away. 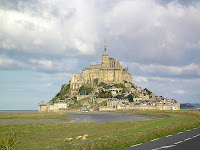 When you get inside the gates it is dreadful. The steep winding street that leads up to the monastery is full of the worst kind of tourists traps, many with barkers  outside.  You can see the shock and distress on the faces of visitors when they see this shameful street.

Instead of being a place of tranquillity it is full of greedy get rich quick merchants. Wikipedia says that the islet belongs to the French commune of Mont-Saint-Michel. Presumably they have allowed these scum in to increase their rents.

If you want to visit Mont-Saint-Michel  view it from a distance [the other side of the car park shown below] and free of charge. Do not pay to park and don't go inside. You will only be disappointed. 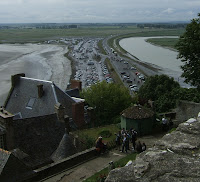 Provins is just as bad.  It is about 90 kilometres to the south east of Paris. The UNESCO citation describes Provins as

"The fortified medieval town of Provins is situated in the former territory of the powerful Counts of Champagne. It bears witness to early developments in the organization of international trading fairs and the wool industry. At the beginning of the 2nd millennium Provins was one of several towns in the territory of the Counts of Champagne that became the venues for great annual trading fairs linking northern Europe with the Mediterranean world."

Before visiting Provins we checked our copy of Lonely Planet's 2009 [eight edition] guide to France. It does not mention Provins (which seemed strange given that the place was a World Heritage site).

I do not know if Lonely Planet deliberately ignored Provins. If they did, I can understand why.

Like Mont-Saint-Michel there is a strong smell of hucksterism in the air. Like Mont-Saint-Michel it looks like a place that is run to maximise the income of the restaurant and attraction owners who fill the town. We walked around the town but got no sense of any historical authenticity. I could not see why the place was a World Heritage site. It just seemed to be full of Disneyworld history [see the photo of the jousting ground below] and places set up solely to pluck tourists as quickly as possible. 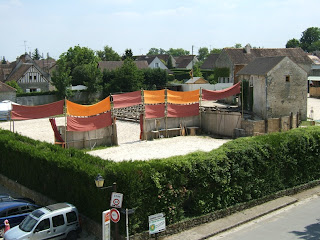 When I go abroad I make a practice of visiting World Heritage sites. I have rarely been disappointed, but Provins is the worse site I have visited.  Both places need to be taken out of the hands of the local petite bourgeoisie and put under proper management. At the moment they are a disgrace to France. 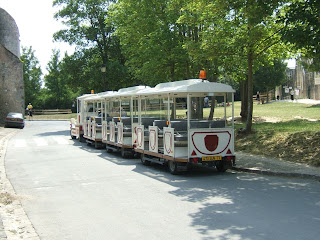