Currently there is a lot of interest in augmented reality, with applications for the iPhone and  Google Android phones. A number of technologies [large screen mobile phones, GPS, 3G wireless networks and electronic compasses] have become mature enough to make AR applications feasible.

It is still very much early days for the technology, though my feeling is that it is going to be very big in a few years time. The range of possible applications is enormous. 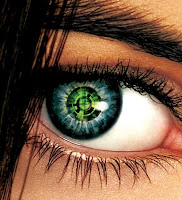 At the moment people are looking at augmented landscapes on the screens of their mobile phones. That is not very satisfactory. The breakthrough is going to come when we are able to view augmented landscapes through a pair of spectacles or contact lenses. There are early versions of both in use or development at the moment. Read this IEEE Spectrum article from a development team at the University of Washington.

If we want to think about what an augmented world might be like we can turn to science fiction. I would recommend two books.

Halting State by Charles Stross is set in a Scotland of 5-10 years hence where everybody is wearing AR googles.

Rainbows End by Vernor Vinge is set in a California of 10-20 years hence where the technology has advanced much further.

"Robert Gu is a recovering Alzheimer's patient. The world that he remembers was much as we know it today. Now, as he regains his faculties through a cure developed during the years of his near-fatal decline, he discovers that the world has changed and so has his place in it.  He has no choice but to learn how to cope with a new information age in which the virtual and the real are a seamless continuum, layers of reality built on digital views seen by a single person or millions, depending on your choice. But the consensus reality of the digital world is available only if you know how to wear your wireless access-through nodes designed into smart clothes-and to see the digital context-through smart contact lenses." 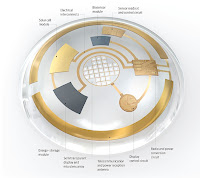 The book is also about the emergence of the first artificial intelligence. You can read an excerpt from the book here.

Some technological changes are not very important. It was nice to move from typewriters to word processing, but hardly earth shaking.

Email ThisBlogThis!Share to TwitterShare to FacebookShare to Pinterest
Labels: computing